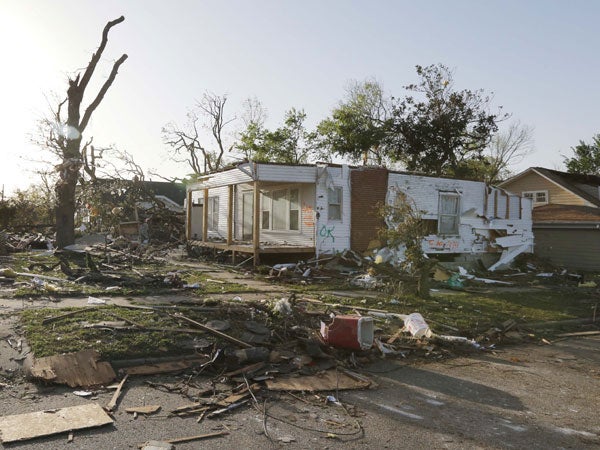 A home damaged by a tornado stands without a roof in Baxter Springs, Kan., Monday, April 28, 2014. Sunday’s tornado damaged dozens of buildings and injured at least 25 people. AP

VILONIA, Arkansas — Emergency officials were searching for survivors Monday in the debris left by a powerful tornado that carved a huge path of destruction through several Midwestern and Southern states including Arkansas, where at least 15 people were killed.

The tornado that slammed into a town about 10 miles (16 kilometers) west of the Arkansas state capital of Little Rock on Sunday evening, killing at least 15 people, grew to about half a mile (800 meters) wide and was among a rash of tornadoes and heavy storms that rumbled across the center and south of the U.S. overnight, ending a lull in violent weather across America with a fury. The National Weather Service warned that more tornadoes, damaging winds and very large hail would strike in parts of Mississippi, Alabama, Tennessee and Louisiana on Monday.

It was among a rash of twisters and violent storms across the Midwest and South that killed 17 people in all on Sunday.

“We’ve got a powerful storm system affecting the eastern two-thirds of the United States over the next few days,” said Russell Schneider, director of the Storm Prediction Center in Norman, Oklahoma.

With forecasters warning of more of the same Monday across the South, a large tornado damaged homes and downed trees and power lines around Tupelo in the bordering state of Mississippi. Tupelo Mayor Jason Shelton said there were several injuries, though none were apparently life-threatening.

Brandon Morris, spokesman for the Arkansas Department of Emergency Management, said crews were sifting through the rubble in the hope of uncovering survivors and to assess the full extent of the destruction.

“Right now, the main focus is life safety,” Morris said. “We’re trying to make sure everyone is accounted for.”

A meteorologist with the National Weather Service in Arkansas said he was virtually certain the storm that hit the towns of Vilonia and nearby Mayflower would be rated as America’s strongest twister to date this year.

Meteorologist Jeff Hood said the storm could have been an EF3, with winds greater than 136 mph (218 kph). He said officials are studying the environmental impact.

Storm ratings for Sunday’s twisters were not immediately available. Before Sunday, the U.S. had not had a tornado rated EF3 or higher since Nov. 17, a streak of 160 days, the fourth-longest on record. This also would be the latest date for a storm rated EF3 or higher. The previous latest big storm for a year was March 31, 2002.

Another twister killed a person in Oklahoma before crossing into Kansas to the north. A suspected tornado also struck in northwest Louisiana.

The Arkansas twister shredded cars and trucks along Interstate 40, the main corridor north of Little Rock. After the storm passed, big trucks tried to navigate through the damage as gawkers captured photos of the destruction.

Becky Naylor, 57, of Mayflower, said up to 22 people “packed like sardines” into her storm cellar as the tornado approached.

“People were pulling off the highways and were just running in,” said Naylor.

Men held the cellar doors tight to prevent the tornado from ripping them apart.

“It sounded like a constant rolling, roaring sound,” she said. “Trees were really bending and the light poles were actually shaking and moving. That’s before we shut the door and we’ve only shut the door to the storm cellar two times.”

The other time was in 2011, during an EF-2 tornado that followed nearly the same path and killed at least four people.

The Arkansas Department of Emergency Management raised the Arkansas death toll to 16 early Monday — eight adults and two children in Faulkner County, five people in Pulaski County and one in White County.

At a news conference in the Philippines, President Barack Obama sent his condolences and promised the government would help in the recovery.

Sunday was the third anniversary of a day when 122 tornados struck parts of Mississippi, Alabama, Tennessee, Virginia and Georgia and killed 316 people.