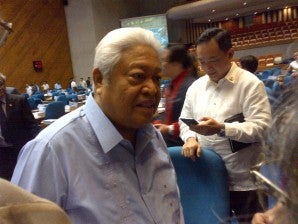 This was how the principal author of the reproductive health (RH) law described the Supreme Court’s ruling upholding the constitutionality of the law, but striking down eight provisions partially or in full.

Former Albay Rep. Edcel Lagman noted that the government and the intervenors in the petitions against the law opted not to file a motion for reconsideration on the court’s decision, saying the provisions it had struck down “barely scrape the epidermis of the law, whose heart and soul remain unsullied.”

“The option not to seek reconsideration sends the clear message that the provisions declared unconstitutional have a peripheral effect on the law, whose main import and general efficacy have not been diminished and implementation unhampered,” Lagman said in a statement.

While upholding the law, the Supreme Court nevertheless struck down the following provisions: penalizing healthcare providers that refuse to disseminate information about RH programs as well as public officers who refuse to support the programs, regardless of their religious beliefs; allowing a married individual, not in an emergency or life-threatening case to undergo reproductive health procedures without the consent of the spouse; penalizing health service providers who will require parental consent from minors in non-emergency situations; and requiring private health facilities and hospitals owned by religious groups to refer non-emergency patients to another health facility that allows minors who have suffered miscarriages access to modern methods of family planning without the parents’ consent.

Lagman said these provisions’ “minor” effect on the reproductive health law could be remedied by a new legislation.

Since the high court’s ruling was not appealed, the government could now concentrate on implementing the measure, he added.

The reproductive health law requires the government to provide contraceptives to poor families as well as mandates age-appropriate sex education in school.

Proponents of the measure said it was intended to reduce maternal and infant mortality by allowing couples to space the births of their children.