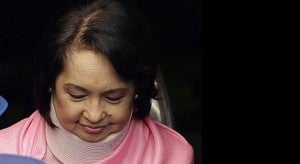 MANILA, Philippines—The Ombudsman has dismissed the complaint for graft and plunder filed against former President Gloria Macapagal-Arroyo and her son, Camarines Sur Rep. Dato Arroyo, in connection with the Libmanan-Cabusao Dam and Skybridge 1 and 2 projects in Camarines Sur.

Ombudsman Conchita Carpio Morales approved on April 22 the recommendation of its Field Investigation Office (FIO) to terminate the case as the evidence did not warrant criminal charges against the Arroyos.

In a 28-page investigation report, the FIO said there was no evidence to show the Arroyos actively participated in the planning or implementation of the projects.

It said funding for the Libmanan-Cabusao Dam and Skybridge 1 and 2 projects did not come from the President’s Social Fund or Representative Arroyo’s Priority Development Assistance Fund, but was an infrastructure project of the National Irrigation Administration and Department of Public Works and Highways.

Thus there was no proof the respondents amassed, accumulated or acquired ill-gotten wealth directly or through their subordinates in the NIA and DPWH as both projects were funded through the regular budget of the respective agencies. Nor was there evidence to show the Arroyos demanded and received the amount of not less than P50 million as “SOP” from the projects.—Cynthia D. Balana