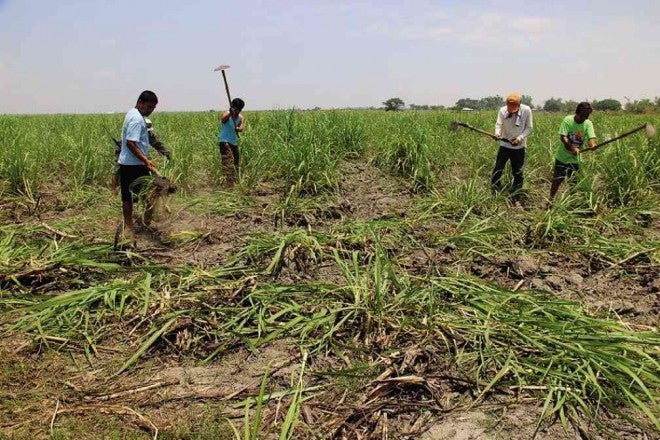 FARMWORKERS dismayed by the supposed failure of the Department of Agrarian Reform to remove planters in Hacienda Luisita in Tarlac on Thursday resort to uprooting sugarcane in Barangay Pando, Concepcion, into the land ready for rice growing. PHOTO COURTESY OF CBCP-NASSA

CITY OF SAN FERNANDO—More than 50 farmworker-beneficiaries of Barangay Pando in Concepcion town on Thursday trooped to the 6,600-square meter lot that the Department of Agrarian Reform (DAR) had titled in the name of Lourdes Galang to help its new owner uproot sugarcane.

By helping clean the area, Hacienda Luisita’s former tillers acted to displace the arriendador or people who rent land from lot owners to plant crops.

This aspect of farm life in Hacienda Luisita is one of the issues that plague 6,296 farmworkers at Luisita in Tarlac province who now own more than 4,000 hectares of the sugar estate owned by relatives of President Benigno Aquino III.

The Supreme Court, in a final ruling on April 24, 2012, ordered the distribution of Luisita land to the farmers.

“The policy on agrarian reform is that control over the agricultural land must always be in the hands of the farmers,” the high court said in its July 5, 2011 decision, which it reiterated in a subsequent Nov. 22, 2011 resolution and the 2012 final resolution.

Amurao said rice growing as an enterprise was now possible in Barangay (village) Pando because FARM has received irrigation support through five water pumps from the National Secretariat for Social Action of the Catholic Bishops’ Conference of the Philippines.

But the task won’t be easy.

“While DAR has formally transferred titles to farmworkers, real transfer of wealth and power did not occur as the redistribution process was [quickly] hijacked by financiers who reconsolidated the [agrarian] lands through the arriendo system,” said Amurao.

Sibayan said the arriendo system became institutionalized after the labor strike at the estate in 2004.

“The conclusion that DAR played a big part in the reconsolidation of the lands is most unfortunate and extreme to say the least,” said Anthony Parungao, DAR undersecretary for legal affairs.

“We call on all parties concerned to instead help DAR, in a spirit of cooperation, to further improve the implementation of the SC decision for the welfare of the [Cloa holders].”

He said the agency has organized 10 associations of farmworker-beneficiaries in the 11 villages inside Luisita. He said DAR has finished soil fertility testing, water resources assessment, area profiling and integrated farming training.

Citing DAR records, he said 6,024 farm lots had been demarcated and 4,716 farmworker-beneficiaries had received titles to about 5,500 lots “despite reported instances of harassment of survey teams and actual destruction of markers by those opposed to the DAR effort.”

Sibayan, a third-generation farmworker, had refused to claim her Cloa from DAR, in protest, because the agency assigned her a lot in Barangay Pando, instead of lots she preferred in Barangay Balete in Tarlac City. Her husband was also granted lots in Mabilog village, also in Concepcion town, instead of Balete.

“Those assigned lots in Concepcion spend P250 to P300 to reach their places. That’s a lot of money for poor people like us. And DAR or other government agencies don’t provide us support for farming,” she said.