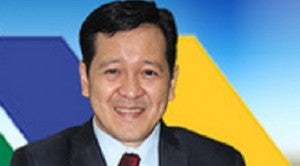 MANILA, Philippines — Embattled Metro Rail Transit general manager Al Vitangcol III said on Wednesday that he would file criminal charges  against Czech Ambassador to the Philippines Josef Rychtar “most probably” within the week for implicating him in a $30-million extortion try on the executives of the Czech company Inekon.

In a forum in San Juan City, Vitangcol — who was accused by Rychtar of trying to extort $30 million from Inekon in July 2012 through Wilson de Vera, a losing mayoral candidate and member of the Liberal Party, the political party of President Benigno Aquino III — said the criminal charges for Rychtar’s supposed “perjurious statements” had yet to be determined by his lawyers.

He said, however, that these would possibly have to do with violations of the Revised Penal Code.

“We’re really filing. We’re just preparing the papers now,” he said, adding  his lawyers would determine which court to file the charges.

Asked if the charges would hold considering a performing diplomat’s immunity from lawsuits under the Vienna Convention on Diplomatic Relations, Vitangcol said, “Eh … he said that he already shed the immunity. Remember, in a Senate hearing, I told him ‘I challenge you to (waive) the immunity  and face the court,'”he said.

Vitangcol was referring to a  Senate hearing on the delayed projects of the DOTC called by the Senate committee on finance headed by Sen. Francis Escudero on April 8.

Hours after Vitangcol’s challenge during that hearing, Rychtar retorted, “I am not afraid of him,” saying he had “no problem” shedding his immunity.

Charles Jose, spokesman of the Department of Foreign Affairs, said however that Rychtar must first obtain the approval of his government before waiving his immunity.

In the forum, Vitangcol pointed out what he said were the inconsistencies and holes in the statements of Rychtar and other personalities supposedly involved in the extortion attempt.

He said he could now answer the issues “point by point” after he managed to secure a certified true copy of Rychtar’s five-page statement from lawyer Nicanor Jimeno, the notary public who notarized document, in January.

The other statements were obtained from Jimeno’s notarial register at the Office of the Clerk of Court of the Regional Trial Court of Makati.

According to Vitangcol, contrary to Inekon’s claims, the companies Siemens AG and 11fite also of the Czech Republic are the ones that hold “the intellectual property rights over the original design of the MRT trains.”

“If we take a look at the original supplier of the MRT 3, it was CKD-Tatra, a company established in 1963, that supplied the original trains for MRT3. Correct, it’s made in the Czech Republic but it was supplied by CKD-Tatra. CKD-Tatra suffered financial losses and in the year 2002, a portion of it was sold to Siemens AG, including the division of CKD transportation. And in 2004, the remaining part including CKD Holding was sold to 11fite. This is another Czech Republic company. the Inekon group tried to buy into CKD-Tatra but it failed,” he said.

He said the proposal of the Inekon group was to supply 52 light rail vehicles (LRVs, at a total cost of $174 million.

He said the budget as approved by the National Economic and Development Authority for the contract was “only  $3 million per unit.

He said they made a market research and looked at all those who supplied  in the last 10 years in the world.

“And we got the average, this is based on documents, and then the average that we got is 1.89 (million dollars) per unit. So that’s the budget we made,”  he said, adding a recommendation was made to go through a public bidding.

Palace: We can’t blame increase in population on Vitangcol