Do right for labor, Aquino urged 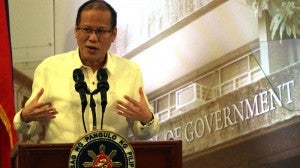 MANILA, Philippines—How the Filipino worker will perceive President Benigno Aquino III come Labor Day is all up to him, labor groups said Tuesday.

Around 30 representatives of various labor and worker organizations have been invited to a pre-Labor Day dialogue in Malacañang on Thursday with President Aquino to discuss critical worker issues.

“Labor groups have been very patient in discussions with key government executives to make them understand the issues that deeply hurt the working class. The output of that dialogue was finalized on April 9 and we believe it’s been elevated for President Aquino’s consideration,” said Michael Mendoza, president of the Associated Labor Unions-TUCP and one of the conveners of the labor and worker groups coalition called Nagkaisa.

“It’s now up to him (Aquino) how he wants to be treated by the working class on May 1. We in the labor sector already did our part for him not to repeat his previous Labor Day disconnects on worker issues,” Mendoza said.

Daniel Edralin, chair of the Alliance of Progressive Labor-Sentro, said that of the eight issues on the table, Nagkaisa wants Aquino to make a strong policy pronouncement against the contractualization system of employment.

“There are millions and millions of skillful and talented Filipinos in the labor force today who don’t have regular jobs. Majority of these workers are on the ‘555’ (five-month contract) or ‘endo’ system of employment. As a consequence, they are exploited by employers and forever trapped in the vicious cycle of abject poverty. We want President Aquino to make a strong policy statement toward ensuring security of tenure for workers by criminalizing and eliminating contractualization at the soonest possible time,” Edralin said.

Aside from ending contractualization, Nagkaisa is also demanding that Aquino enhance labor rights by deterring union-busting and prosecute the extrajudicial killings of labor organizers.