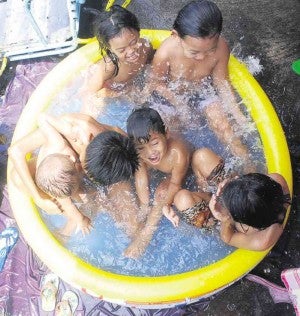 COOL KIDS. Children enjoy a dip in an inflated pool on Road 10 in Navotas City. The hottest day of the month was recorded in Metro Manila on Monday at 35.6 degrees Celsius around 3 p.m. ARNOLD ALMACEN

If you felt it was too hot on Monday, it really was.

The weather bureau recorded the highest temperatures for the month in Luzon on Monday, saying hotter days may be ahead.

But the low pressure area (LPA), which entered the country’s area of responsibility before noon on Monday, could still cool down Luzon a notch as it draws nearer, said the Philippine Atmospheric, Geophysical and Astronomical Services Administration (Pagasa).

Forecaster Buddy Javier told the Inquirer that Metro Manila was hottest on Monday at 35.6 degrees Celsius at around 3 p.m.

Temperatures in Cabanatuan City in Central Luzon rose to 36.4 degrees around 2 p.m. It was 35 degrees at Sangley Point in Cavite.

Ironically the highest temperature in Tuguegarao City, historically the warmest place in the country, was 33.9 degrees Celsius at 2 p.m.

But the city was hottest for the month on Sunday around 2:20 p.m., with temperatures rising to 37.2 degrees.

“Temperatures in Metro Manila could reach 36 degrees while Tuguegarao City could still have 38-degree temperatures because we are still in the middle of the dry season,” Javier said.

He explained that Luzon was experiencing a heat surge because of the ridge of a high pressure area prevailing over the northern part of the region. A high-pressure area brings dry and warm winds.

To avoid heat exhaustion, people should stay indoors as much as possible, according to a Pagasa advisory.

In case air-conditioning is unavailable, staying on the lowest floor away from the sun is advisable.

People are also advised to wear clothing made of light materials with light colors, to stay hydrated by drinking plenty of water and to avoid eating food high in protein, which can increase body heat.

Javier said that while Luzon sizzled on Monday, the Visayas and Mindanao enjoyed generally fair weather, which could continue until Tuesday.

The forecaster said that as of 4 p.m, Monday, the LPA was 830 kilometers east of Guiuan, Eastern Samar province, and still too far to have any effect on the country.

In its forecast for Tuesday, Pagasa said the whole country would be partly cloudy to cloudy with isolated rain showers or thunderstorms, mostly in the afternoon or evening.

Moderate-to-occasionally strong winds will prevail over the eastern sections of Central and Southern Luzon and over the Eastern Visayas where coastal waters will be moderate to occasionally rough.

Light-to-moderate winds will prevail over the rest of the Visayas, Luzon and Mindanao, with slight to moderate seas.