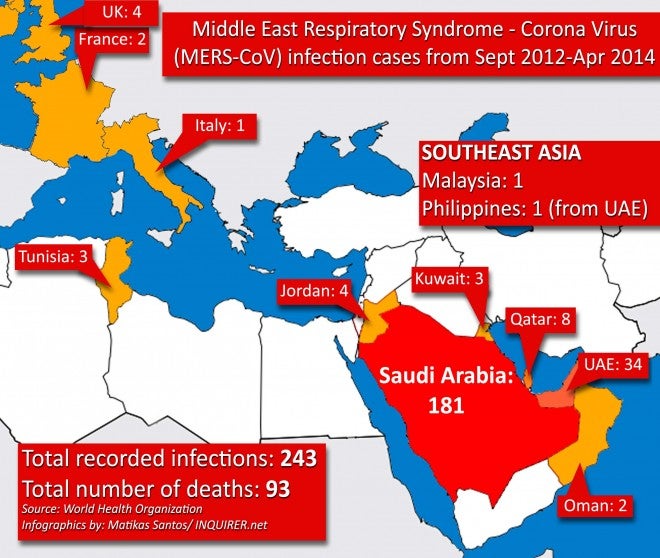 Go to the nearest government hospital and get tested for your and your family’s sake if you were on the plane with a male Filipino nurse who initially tested positive for the deadly Middle East Respiratory Syndrome-Corona Virus (MERS-CoV).

As of Monday, 174 out of the 415 passengers of Etihad Airways Flight No. EY 0424 had yet to submit themselves to a simple and free nose-and-throat swab examination at the nearest Department of Health (DOH) facility to rule out infection, according to a DOH advisory.

Signed by Health Secretary Enrique Ona, the advisory listed the names of 174 passengers who have not contacted the agency for testing.

“As this disease is transmitted through close contact, those closest to you are the ones most at risk, in case you may be infected,” Ona said.

These passengers must undergo the nose-and-throat swab test to rule out the possibility of infection and ensure that they will get prompt medical attention if needed, he added.

MERS-CoV is a respiratory virus that is considered a deadlier but less-transmissible cousin of the Severe Acute Respiratory Syndrome (SARS), which spread in China 12 years ago.

The symptoms of MERS-CoV are similar to the common flu, which include fever with cough, cold and sneezing, according to the DOH. The incubation period of the virus is usually 14 days.

“But why wait for 14 days when you are already incubating now? It is possible that you already carry the virus and you are already contagious,” said Dr. Lyndon Lee Suy, manager of the DOH Emerging Infectious Disease Program.

The Filipino nurse came into contact with the Filipino paramedic who died of MERS-CoV in the United Arab Emirates.

He was already on the plane back to Manila with his family when his test results in UAE came out positive but when retested in the Philippines the results were negative.

Lee Suy said that even if the overseas Filipino worker (OFW), who came home to Manila on April 15, had been cleared of the virus after two tests conducted by the Research Institute for Tropical Medicine (RITM) in Muntinlupa City yielded negative results, his copassengers must still submit themselves for testing.

“We don’t know his condition while he was on the plane. He may be positive while on the plane, so there is the possibility of infecting his copassengers,” the health official said.

Lee Suy said there was a surge of specimens coming in at RITM but it would take some time to know the results because specimens from the province were being flown to Manila.

“It is really taking time. So we hope the public will understand. We want to be sure with everything,” he added.

On Saturday, Ona said those contacted by the DOH would be fetched by the Regional Epidemiology Service Unit and brought to the nearest DOH or district hospital.

Specimens from tested passengers will be sent by courier to RITM and to Vicente Sotto Memorial Medical Center in Cebu City.

“We are also calling the attention of Filipinos who have returned recently from the Middle East to report to the nearest hospital if they experience symptoms of MERS-CoV, which are similar to the indications of flu, including fever with cough, cold or sneezing,” said Ona.

In Negros Occidental province, five Negrense OFWs have been quarantined for possible MERS-CoV but two have been found negative for the disease, Dr. Ernell Tumimbang, provincial health officer, said Monday.

The five Negrenses were among those on Etihad Airways that arrived last week in the country where one of the passengers was initially found positive for MERS-CoV, he said.

Tumimbang said the five Negrenses identified to be on the same flight were quarantined as a precaution until test results conducted on them come out.

Of the five, three are from Bacolod City, one from Talisay City and one from Toboso town, he said.

Throat swabs were taken from the five and sent to RITM, Tumimbang said.

The three from Bacolod—a male engineer, a female manager and a male seafarer—as well as a male technician from Talisay are being quarantined at Corazon Locsin Montelibano Memorial Regional Hospital, Tumimbang said.

Of the three from Bacolod, two were found negative while the results of the third one were inconclusive and would have to be retested, Dr. Marilyn Convocar, DOH regional officer, informed Tumimbang.

Tumimbang said the test results of the Talisay resident and a housemaid from Toboso confined at Cadiz District Hospital were still being confirmed.

Since this is a priority infectious disease, RITM releases resulted in 24 to 48 hours, he said.

In Quezon City, a resident who was a passenger of Etihad Flight No. EY 0424 was found negative of MERS-CoV.

The female OFW was cleared of the virus on Sunday morning by RITM, which is under the DOH.

Four relatives with whom the woman interacted since arriving in the country tested negative for the illness.

“The woman is OK. She was given assistance and underwent a medical checkup last Friday. RITM cleared her last Sunday,” Pranada said.

The official added that the passenger’s housemates also tested negative for the MERS-CoV.

At first, the woman refused to undergo a medical examination but she was eventually persuaded by DOH personnel.

The Quezon City Police District (QCPD) said there were still five other passengers from the Middle East who were found to be living in Quezon City.

The DOH sought the QCPD’s help in locating the five so they could be tested for the virus.

“Considering the seriousness of the illness, they must have themselves tested immediately before they spread the virus to others,” Montejo said.