Two-thirds of underwater search done, no sign of MH370 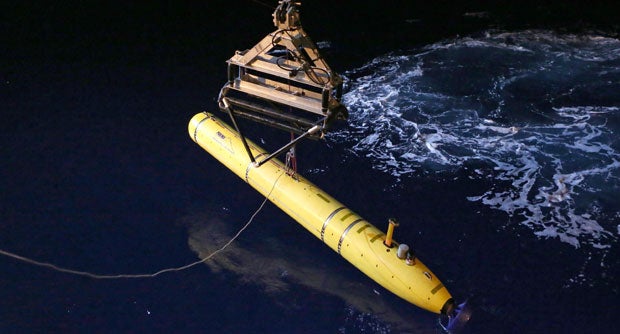 This handout photo taken on April 18, 2014 and received on April 20, 2014 from the Australian Defense Department shows the Phoenix International Autonomous Underwater Vehicle (AUV) Artemis (C) being moved by crane over the side of Australian Defense vessel “Ocean Shield” in the search for missing Malaysia Airlines flight MH 370 in the Indian Ocean. AFP / AUSTRALIAN DEFENSE/LSIS BRADLEY DARVILL

PERTH – Two-thirds of the planned underwater search for missing Malaysia Airlines flight MH370 has been completed, with no signs so far of the jet, Australian officials said Monday.

As many as 10 military aircraft and 11 ships are taking part in the search for the aircraft, which was carrying 239 people when it vanished on March 8 en route from Kuala Lumpur to Beijing.

No debris from the plane has been found despite an intense air and sea search and hopes center on the underwater autonomous vehicle (UAV) Bluefin-21 finding wreckage on the Indian Ocean seabed.

“Bluefin-21 has searched approximately two thirds of the focused underwater search area to date,” the Joint Agency Coordination Center managing the search said in a statement.

“No contacts of interest have been found to date.”

The torpedo-shaped sonar scanning device has so far made eight missions to the vast depths of the ocean with no result, despite exceeding its operating limit of 4,500 meters (15,000 feet).

MH370 inexplicably diverted from its course towards Beijing and is thought to have crashed into the remote Indian Ocean.

Authorities believe acoustic signals picked up from the seabed far off the west coast of Australia by specialist US equipment – known as a towed pinger locator – are the best lead so far in solving the mystery.

With the batteries of the black box beacons now thought to have expired, experts are scouring the seabed in the vicinity of the transmissions to try and find their source.

“The focused underwater search area is defined as a circle of 10-kilometer (6.2-mile) radius around the second Towed Pinger Locator detection which occurred on 8 April,” JACC said.

The center of this search, which will be conducted by all the planes and all but one of the ships in Monday’s search, is about 1,741 kilometers north west of Perth.

The weather in the region is forecast to deteriorate later Monday, particularly in the northern sector, as Tropical Cyclone Jack continues its track southwards, JACC said.

Widespread showers were developing with isolated thunderstorms to the north and east south-easterly winds, it added.

Authorities have indicated they may reassess within days how to approach the extremely challenging search for the plane, expected to be the costliest in aviation history, given that nothing has so far been found.

Malaysia’s government and the airline have come under harsh criticism from Chinese relatives of MH370 passengers – two-thirds of whom were Chinese – over their handling of the incident.

A Malaysia Airlines plane with 166 people aboard was forced to make an emergency landing in Kuala Lumpur early Monday in another blow to its safety image.

Flight MH192, bound for Bangalore, India, turned back to Kuala Lumpur after it was discovered that a tyre had burst on take-off, the airline said.