Aquino vows to step up fight against corruption 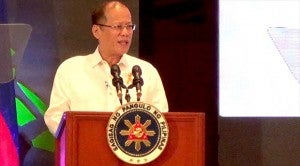 President Aquino on Sunday vowed to step up his campaign against corruption in government for the remainder of his term.

In his Easter message, the President said the public should expect his administration to “further strengthen our institutions” during the last 26 months in office.

“There would be even more corrupt [officials] who would be held accountable,” he said in Filipino.

At the same time, he promised a more robust economy, more social services and eventually “improvement in the lives of Filipinos.”

The President’s renewed promise came a day after Jessica Lucila “Gigi” Reyes flew back to the Philippines and vowed to face plunder charges filed against her over her alleged involvement in the P10-billion pork barrel scam.

Reyes and other government officials implicated in the alleged scam were “expected to reveal everything they know and to cooperate to ferret out the truth regarding these cases,” Communications Secretary Herminio Coloma yesterday said in a radio interview.

“And if they would cooperate and their statements would shed light on the issues now going through the process of the law, they could help the people get justice over the alleged misuse of public funds,” said Coloma.

Whether Reyes, former chief of staff of Sen. Juan Ponce Enrile, should be considered to turn state witness would be up to the Department of Justice, Coloma said.

“So we leave it to Secretary [Leila] De Lima and the Department of Justice to study the situation and give a recommendation on the proper course of action.” Christian V. Esguerra