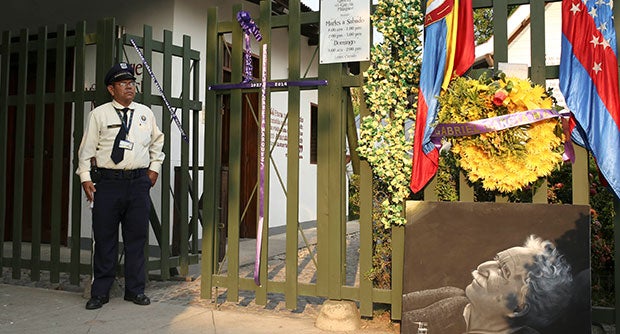 A wreath decorates the entrance to the Gabriel Garcia Marquez Museum, at the house were he was born in Aracataca, Colombia, Friday, April 18, 2014. Nobel laureate Garcia Marquez died at the age of 87 in Mexico City on April 17, 2014. AP

MEXICO CITY— The final resting place for the ashes of Gabriel Garcia Marquez remains unclear. It could be Mexico where he lived for decades or his native Colombia. Perhaps even both.

Colombia’s ambassador to Mexico says it’s completely up to the family of the Nobel laureate who died Thursday in Mexico City. And the family so far has not revealed its wishes.

Ambassador Jose Gabriel Ortiz says Colombians from President Juan Manuel Santos on down would like to see the remains divided between Mexico and Colombia. He notes that while Garcia Marquez wrote many of his novels in Mexico, “he never stopped being Colombian.”

Santos sent a tweet on Saturday confirming he will attend a ceremony in Mexico City on Monday honoring the man he calls “the greatest Colombian of all.”

Read Next
Holy fire ceremony draws thousands in Jerusalem
EDITORS' PICK
Why REIT investment makes sense
Aklan gov to request for ECQ if COVID-19 cases will further increase
Patients ‘almost die’ waiting for Kalibo hospital beds to free up, says mayor
Smart reaffirms dominance as the Philippines’ fastest 5G mobile network
US, Indonesia commit to South China Sea defense in ‘strategic dialogue’
The vivo V21 drops its price to equip the influencer in you
MOST READ
‘Hatid-sundo’ for APORs not allowed during ECQ — PNP
Pacquiao seeks PNP’s help, wants ‘forged’ PDP-Laban memo probed
Anxiety over paltry lockdown aid: ‘We will die of hunger’
‘At peace’ with effort, EJ Obiena establishes himself among PH’s greatest ever
Don't miss out on the latest news and information.