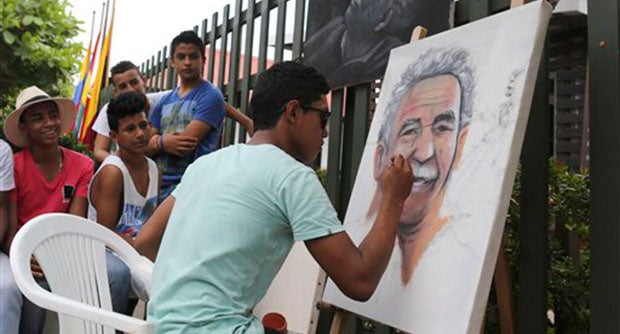 Friends surround Melquin Merchan, an 18-year-old painter from Aracataca, as he paints a portrait of Gabriel Garcia Marquez in front of the house where the Nobel laureate was born in Aracataca, Colombia, Friday, April 18, 2014. Garcia Marquez died at the age of 87 in Mexico City on Thursday. AP

ARACATACA, Colombia — Gabriel Garcia Marquez and his homeland had a relationship as conflicted as any in the Nobel laureate’s twisting and impassioned novels.

Colombia inspired and dismayed Garcia Marquez in equal measure, and the feeling was often mutual.

Nowhere is that ambiguity more evident than in this sweltering hamlet that was the inspiration for the fictitious Macondo in “One Hundred Years of Solitude.”

Since the author died Thursday at the age of 87, residents and holidaymakers have been flocking to the zinc-roofed home where he was born and raised by his maternal grandparents until the age of 8, paying their final, tear-filled respects to a man who was a symbol of pride for a country long torn by violence.

President Juan Manuel Santos declared three days of national mourning for the “most loved and most admired compatriot of all times.”

Still some in this impoverished Caribbean town regret, with not a little bit of rancor, that he didn’t use his considerable wealth and fame to help residents overcome their perennial neglect.

An aqueduct officials have promised for decades to relieve frequent water outages has never been completed despite numerous ribbon-cutting ceremonies. And when authorities converted his childhood home into a museum in 2006, Garcia Marquez reviewed the blueprints but didn’t donate a penny to its $350,000 restoration.

“He should’ve thought more about his people and not left us on our own,” said Mariby Zapata, a 31-year-old dentist. “I guess he preferred fame and abandoned us.”

A few steps away, Robinson Leyva countered that putting the town of 45,000 on the map was generous enough.

“Of course he helped us,” said the 49-year-old teacher. “But officials here didn’t know how to take advantage of his influence.”

Some of Garcia Marquez’s mixed feelings stemmed from the way he was treated for his leftist political views. He fled the country in 1981 after friends and government officials warned him that the army wanted to interrogate him about alleged ties to the now defunct M-19 guerrilla group.

When he was awarded the Nobel Prize a year later, conservative President Belisario Betancur attempted to quash the international backlash against the writer’s treatment by offering him ambassadorships in Europe. But it was too late. Garcia Marquez would always maintain a critical distance from his homeland, proclaiming himself a “wandering and nostalgic Colombian.”

Although he evoked his homeland’s beauty in his novels and visited frequently, he never again resided there permanently, instead spending his time in Europe and Mexico City, where his cremated remains will be displayed at a memorial service Monday. Aracataca’s mayor, Tufith Hatum, says he hopes the author’s ashes are returned to his birthplace.

Colombia’s ambassador to Mexico, Jose Gabriel Ortiz, suggested on Friday that Garcia Marquez’s ashes could be divided between Mexico and Colombia, but there was no official confirmation that the family has agreed to that idea.

“There will be a portion (of the ashes) in Mexico, of course, and I would like to think that another portion could be taken later to Colombia,” he told reporters. “We Colombians would like to do that tribute, to have part of his ashes resting over there.”

Security was one reason why Garcia Marquez stayed away. As he chronicled in his 1996 work “News of a Kidnapping,” an account of several high-profile abductions ordered by cocaine kingpin Pablo Escobar, Colombia had fallen into a seemingly bottomless pit of political and drug-fueled violence.

Known for directness, he never tired of wagging his finger at his compatriots.

“We’re scandalized by our country’s bad image abroad, but we don’t dare admit to ourselves that the reality is worse,” he said in a speech at the presidential palace in 1994. “We’re capable of the noblest acts as well as the most abject, of sublime poems and insane assassinations, of jubilant funerals and deadly revelry. Not because we’re good and others are bad but because we all partake in both extremes.”

Gabo, as he’s almost universally called in Colombia, tried to mediate a solution to the country’s long-running rebel conflict but the effort didn’t go anywhere. In death, he’s had more luck, prompting expressions of praise and mourning both from the Revolutionary Armed Forces of Colombia and the Marxist insurgents’ fiercest enemy, former President Alvaro Uribe.

Still his lifelong friendship with Cuban leader Fidel Castro continues to rankle many in what remains one of Latin America’s most conservative countries. Shortly after his death was announced, recently elected congresswoman Maria Fernanda Cabal, an ally of Uribe, tweeted an old photo of the two under the heading: “Soon you’ll be in hell together.” It was later removed.

Whatever his ideology, Garcia Marquez always sought to strengthen the country’s democracy and bring about peace, the 91-year-old Betancur said in a phone interview with The Associated Press.

With less fanfare, he also taught several generations of journalists by purchasing the newsmagazine Cambio with money from his Nobel and by creating a foundation to train reporters and raise the standards of journalism across Latin America.

“What Gabo did was describe things that nobody had seen before,” said Andres Grillo, an editor at Bogota-based magazine Soho who took part in two workshops with the novelist. “If Colombia is known for something it’s because of him.”

Oscar Collazos, who wrote a biography of the novelist, said much of the criticism is a byproduct of envy.

“They say that because he lived a half-century in Mexico, Garcia Marquez isn’t Colombian; that because he’s friends with Fidel Castro he’s a miserable communist,” Collazos wrote in a column published in El Tiempo newspaper just before the author’s death. “In Colombia, there’s less unanimous support for Garcia Marquez as a person than a writer.”