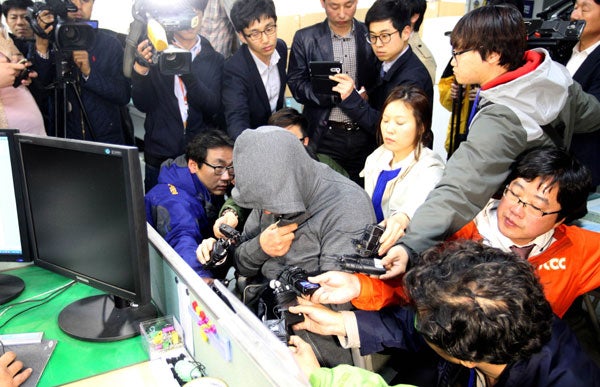 Lee Joon-Seok (C), captain of the South Korean ferry that capsized at sea off the coast of Jindo, is interviewed at Mokpo police station in Mokpo on April 17, 2014. Rescuers worked frantically on April 17 to find 300 people — mostly schoolchildren — missing after a South Korean ferry capsized, with prospects of pulling survivors from the submerged vessel dimming as emotions boiled over among anguished relatives. AFP

JINDO—Investigators on Saturday arrested the captain accused of abandoning the South Korean ferry that capsized three days ago with 476 people on board, as divers finally accessed the submerged vessel and spotted bodies inside.

Lee Joon-Seok and two of his crew were taken into police custody in the early hours of the morning, charged with negligence and failing to secure the safety of passengers in violation of maritime law.

The 69-year-old captain has been severely criticised for abandoning his ship as it sank Wednesday morning off the southwest coast while hundreds remained trapped on board, most of them children on a high school holiday trip.

Twenty-nine people have been confirmed dead in the disaster, but 273 are still missing.

As the arrests were being made, dive teams who had spent two days vainly battling powerful currents and near zero visibility, finally penetrated the passenger decks of the 6,825-tonne Sewol.

“They attempted to get in and retrieve them by cracking the window, but it was too difficult,” he said in a briefing to relatives of the missing.

Many of the more than 500 divers working on the rescue teams are civilian volunteers.

Nets will be placed around the submerged ferry to prevent any bodies drifting away during the eventual recovery process, Choi said, while adding that the rescue teams had not given up hope of finding survivors trapped in air pockets.

Captain Lee was arraigned along with the two officers in charge of the bridge at the time.

Dressed in dark raincoats with their hoods pulled up, the three kept their heads bowed as they were paraded before TV cameras in a police station.

Questioned by TV reporters as to why passengers had been ordered not to move for more than 40 minutes after the ship first foundered, Lee said it was a safety measure.

“At the time a rescue ship had not arrived. There were also no fishing boats around for rescues, or other ships to help,” Lee said.

“The currents were very strong and the water was cold at that time in the area.

“I thought that passengers would be swept far away and fall into trouble if they evacuated thoughtlessly,” he added.

Experts have suggested many more people might have escaped if they had moved to reach evacuation points before the ship listed sharply and water started flooding in.

Lee also confirmed he was not the helm when the ship ran into trouble, and was returning to the bridge from his cabin.

The hundreds of relatives camped out in a gymnasium on Jindo island near the scene of the disaster — most of the them parents of high school students — have sharply criticised the pace of the rescue operation, accusing officials of incompetence and indifference.

Only 174 were rescued when the ferry sank and no new survivors have been found since Wednesday.

Nam Sung-Won, whose 17-year-old nephew was among the missing, said the clock was fast running down on the hope that some may have survived.

“We don’t have much time. Many people here believe this is the last possible day for finding trapped passengers alive.

“After today, hope will be gone,” Nam said.

The unfolding tragedy was compounded by the apparent suicide Friday of the students’ high school vice principal, Kang Min-Kyu, who was seemingly overcome by guilt at having survived the sinking.

Kang, 52, was found hanging from a tree near the Jindo gymnasium. Local media said he had left a note, saying: “Surviving alone is too painful… I take full responsibility.”

More than 350 of those on board were students from Kang’s Danwon High School in Ansan city just south of Seoul.

Initial questioning of the captain has focused on what actually caused the ferry to sink.

Tracking data from the Maritime Ministry showed the vessel made a sharp turn just before sending its first distress signal.

Some experts believe a tight turn could have dislodged the heavy cargo manifest — including more than 150 vehicles — and destabilised the vessel, causing it to list heavily and then capsize.

But others suggested the turn might have been caused by a collision with a rock or other submerged object.

Chief prosecutor Lee Seong-Yoon stressed there was “no limit” to the range of the investigation.

“We will make sure… those responsible are sternly held accountable,” Lee said.

Three giant, floating cranes are now at the rescue site, but coastguard officials stressed they would not begin lifting the multi-deck ferry until they were sure there were no survivors inside.