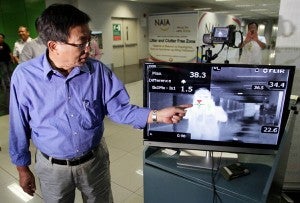 MANILA, Philippines–New tests conducted by the Department of Health (DOH) yielded negative for the male Filipino nurse who returned from the United Arab Emirates (UAE) with the Middle East Respiratory Syndrome-Corona Virus (MERS-CoV).

In a press conference on Saturday, Health Secretary Enrique Ona said further tests done by the Research Institute for Tropical Medicine (RITM) on the overseas Filipino worker (OFW), who came home to Manila in the afternoon of April 15 and had been initially diagnosed with MERS-CoV, showed that he no longer carried the virus.

The RITM conducted two tests on the OFW and both yielded negative results.

MERS-CoV is a communicable disease that may be passed on to others through exposure or close contact with a positive carrier. The incubation period for the disease is up to 14 days, the DOH said.

It is considered a deadlier but less-transmissible cousin of the SARS virus that erupted in Asia in 2003 and infected 8,273 people, nine percent of whom died.

Ona said the health worker has been discharged after results of the tests were released.

Asked to explain the seemingly conflicting results, Ona said the test result was positive when it was done in the Middle East but, most likely, he was able to overcome the virus.

“It means there is no virus circulating in his body anymore,” Ona said.

Last Wednesday, the DOH confirmed that the nurse was the first reported case of MERS-CoV in the country based on initial test results from the UAE.

The OFW was believed to have been exposed to the virus through a Filipino paramedic in the UAE who died last week after contracting MERS-CoV. He was ordered to take laboratory tests but he left for Manila before the results were released.

Upon his arrival in Manila, the results from the UAE was released, showing he was infected. This prompted the DOH to put him and his family in quarantine for further tests.

In the UAE, five Filipinos infected with the deadly virus remained quarantined at a hospital but were in stable condition, the Department of Foreign Affairs (DFA) said yesterday.

Assistant Secretary Charles Jose, DFA spokesperson, made this announcement yesterday, citing a report from the Philippine Embassy in Abu Dhabi.

The Filipino worker who died of the virus on April 10 is set to be cremated in the UAE. His name has been withheld by the DFA but Jose said the embassy “is helping the family comply with necessary procedures for the cremation of the remains.”

Last week, the DFA called on Filipinos across the Middle East to take precautionary measures amid the continuing threat of the virus and “follow the advice of the local health authorities in their host countries.”

Apart from the male nurse, 40 other passengers who were with him on Etihad Airlines flight EY 0424 from the UAE, also tested negative for MERS-CoV.

Out of the flight’s 415 passengers, the DOH has traced and contacted 119, of whom 72 have been tested.

“We’re still waiting for the results of the tests conducted on the other passengers, they’re still being processed,” said Dr. Lyndon Lee Suy, DOH program manager on emerging infectious diseases. He explained that it takes about nine to 10 hours to get the test results.

Lee Suy said there is no epidemic or outbreak in the country or in the Middle East where the virus is believed to have originated from.

“That is why the World Health Organization (WHO) has not imposed travel restrictions to and from the Middle East,” he said.

Ona said the OFW’s family—his wife and two children—as well as a household helper who traveled with him from the UAE and five others who fetched them at the airport also tested negative for MERS-CoV.

He said the DOH Task Force MERS-CoV, which was mobilized to create awareness about and prevent the spread of the disease, continues to trace other passengers of EY 0424.

“Although the OFW now tested negative for the disease, at the time he was traveling from Abu Dhabi to Manila last April 15—a seven-hour flight—he was still deemed a positive carrier of the virus, and that all his fellow passengers were exposed to him. Anybody who may have been in close contact with him for the duration of the flight, were at risk of infection,” he said. With a report from Tarra Quismundo and AFP