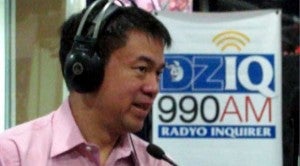 MANILA, Philippines–Sen. Aquilino “Koko” Pimentel III on Saturday welcomed a German think tank’s analysis that there won’t be any true progress in the Philippines unless the country’s political dynasties are dismantled.

“That’s great news because we need outside pressure and help to succeed in dismantling political dynasties,” Pimentel, son of former Sen. Aquilino “Nene” Pimentel Jr., said in a text message to the Inquirer.

Pimentel, the chair of the Senate committee on electoral reforms and suffrage, said he planned to hold a hearing on Sen. Miriam Defensor-Santiago’s antidynasty bill in May.

He added that he would also fast-track the drafting of his own version of the bill called for by no less than the constitution almost 30 years ago.

“[The hearing on political dynasties] will already be in May.  I’m studying the [proposed basic law on the] Bangsamoro this break,” Pimentel said.

The passage of the proposed Bangsamoro basic law is a priority of the Aquino administration.

The creation of the Bangsa-moro in the southern Philippines is provided for in the peace agreement between the Philippine government and the Moro Islamic Liberation Front.

The Inquirer last week reported that German think tank Bertelsmann Foundation said true progress in the Philippines would be out of reach unless oligarchies that control both politics and business were dismantled.

Bertelsmann was quoted as saying that the dominance of entrenched family clans in politics and the economy should be reduced in order to make politics and economics more transparent and competitive. It said an antidynasty law must be passed.

The dominance of a few political families in the country has kept Congress from passing an antidynasty measure since the post-Edsa constitution was ratified in 1987.

Read Next
Bar proctor suspended for photographing test papers
EDITORS' PICK
Nestlé Philippines’ ‘NESCAFÉ Plan’ bags Grand Anvil at PRSP 56th Anvil Awards
822 NPA-free barangays set to get P20-M gov’t aid — Esperon
Pope Francis to meet top cleric Sistani on second day in Iraq
Don’t waste the hope of vaccines, warns WHO
Every Filipino home can now be a smart home with realme TechLife
Smart reinforces superiority with best speed and mobile video experience in PH
MOST READ
So: I lacked connections to succeed in PH ‘culture’
Robredo on Sara Duterte leading poll surveys: Why are Filipinos drawn to leadership of this kind?
US weapons, hardware in exchange for VFA
US lays out list of aid to ‘satisfy’ Duterte following VFA payment demand
Don't miss out on the latest news and information.