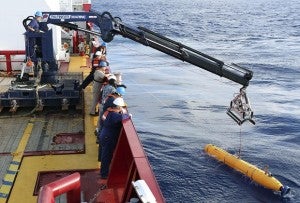 In this Monday, April 14, 2014, photo provided by the Australian Defense Force an autonomous underwater vehicle is deployed from ADV Ocean Shield in the search of the missing Malaysia Airlines Flight 370 in the southern Indian Ocean. The search area for the missing Malaysian jet has proved too deep for the robotic submarine which was hauled back to the surface of the Indian Ocean less than half way through its first seabed hunt for wreckage and the all-important black boxes, authorities said on Tuesday. AP/Australian Defense Force, Lt. Kelli Lunt FILE PHOTO

KUALA LUMPUR—The effort to find missing flight MH370 is at a “very critical juncture”, Malaysia’s transport minister said Saturday as authorities mull whether to reassess a challenging search of the Indian Ocean seabed that has so far found nothing.

“The search for today and tomorrow is at a very critical juncture. So I appeal for everybody around the world to pray and pray hard that we find something to work on,” Transport Minister Hishammuddin Hussein said.

The jet is believed to have crashed in deep and remote waters far off Western Australia.

But with no results from the multi-national search operation for the Boeing 777, which vanished on March 8 carrying 239 people, Australia’s Prime Minister Tony Abbott on Thursday set a one-week deadline to locate the plane by mini-submarine.

The Australian-led search effort is relying on a single US Navy submersible sonar scanning device to scour an uncharted seabed at depths of around 4,500 metres (15,000 feet) or more.

Technical hitches, including the fact that the torpedo-shaped Bluefin-21 is operating at the extent of its depth limit, made for a slow start to the search.

Launched from an Australian naval vessel, the device has so far made six deep-sea scanning runs but has detected nothing.

“We have pursued every possible lead presented to us at this stage, and with every passing day the search has become more difficult,” Hishammuddin, who is heading up the Malaysian government’s response to MH370, told reporters in Kuala Lumpur.

As the search and rescue effort expected to be the costliest in aviation history wears on, authorities have indicated alternative methods may be needed, including possibly deeper-diving devices.

Hishammuddin said adjustments “may include widening the scope of the search and utilising other assets that could be relevant in the search operation”, but he stressed the search would not be abandoned.