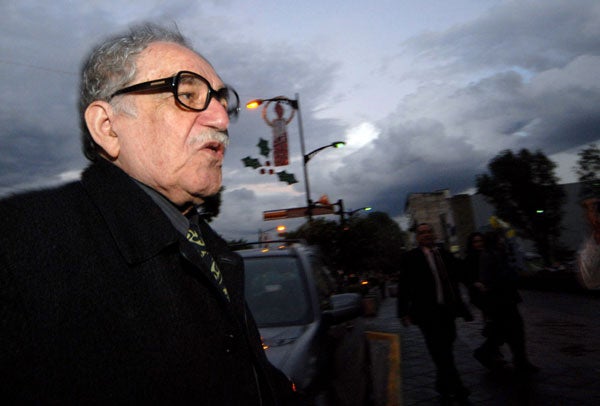 (FILE) Literature Nobel Prize Colombian Gabriel Garcia Marquez, gestures upon arriving at the University of Guadalajara in Guadalajara, Mexico, on November 23, 2007. Garcia Marquez, the author of “One Hundred Years of Solitude”, died on April 17, 2014 in Mexico City at the age of 87, Mexican and Colombian media reported. AFP

Here are quotes from friends and famous admirers of the Nobel-winning author of “One Hundred Years of Solitude”: 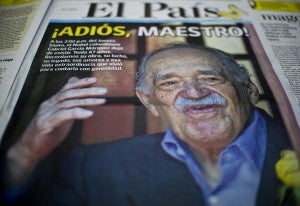 “The world has lost one of its greatest visionary writers — and one of my favorites from the time I was young. Affectionately known as ‘Gabo’ to millions of his fans, he first won international recognition with his masterpiece One Hundred Years of Solitude. I once had the privilege to meet him in Mexico, where he presented me with an inscribed copy that I cherish to this day. … I offer my thoughts to his family and friends, whom I hope take solace in the fact that Gabo’s work will live on for generations to come.”

“I was saddened to learn of the passing of Gabriel Garcia Marquez. From the time I read One Hundred Years of Solitude more than 40 years ago, I was always amazed by his unique gifts of imagination, clarity of thought, and emotional honesty. He captured the pain and joy of our common humanity in settings both real and magical. I was honored to be his friend and to know his great heart and brilliant mind for more than 20 years.”

“One thousand years of solitude and sadness for the death of the greatest Colombian of all time. Solidarity and condolences to (Garcia Marquez’s wife Mercedes) Gaba and the family. Giants never die.”

“Dear Gabo, you once said that life isn’t what one lived, but the life one remembers and how he remembers it to retell it… your life, dear Gabo, will be remembered by all of us as a unique and singular gift, and as the most original story of all. It’s difficult to say goodbye to you, with all that you’ve given us! You will always be in my heart and in those of all who loved and admired you. Shak.” 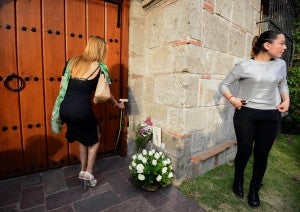 “The greatest of all has left but his immortal legend remains.”

“A great writer whose work gave great exposure and prestige to the literature of our (Spanish) language has died. His novels will survive him and continue gaining readers everywhere.”

“Very few literary works survive the ruthless passage of time, very few authors are remembered, but Garcia Marquez is in the pantheon of the classics. In order not to weep for him, I will keep reading him again and again.”

“In the name of Mexico, I express sorrow over the death of one of the greatest writers of our time: Gabriel Garcia Marquez. Through his work, Garcia Marquez made Latin American magical realism universal, marking the culture of our era.”

“His unique characters and his exuberant Latin America will remain etched in the heart of the memory of millions of his readers.” 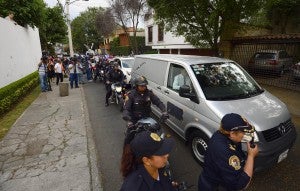 “He broke a wall between reality and fantasy, opening a path for an entire generation of South American writers.”

“Gabo left his spiritual footprint engraved in the New Era of our (Latin) America, One hundred years of Love for his eternal spirit.”

“Gabo has left us, we will have years of solitude, but his works and love for the Great Fatherland (Latin America) remains. Until victory, always, dear Gabo!”

“Colombia and the world lose with the death of Gabo. His work safeguards his memory.”

Read Next
MH370 search to be most costly ever at $100 million — analysts
EDITORS' PICK
The vivo V21 drops its price to equip the influencer in you
NCR’s COVID-19 cases rise by 65% in past week; Pateros, Malabon at critical risk
Group vs COVID-19 vaccines planning mass protest? Not during ECQ, says Eleazar
Smart reaffirms dominance as the Philippines’ fastest 5G mobile network
86% of COVID-19 patients at PGH unvaccinated, says spokesman
Why REIT investment makes sense
MOST READ
‘Hatid-sundo’ for APORs not allowed during ECQ — PNP
Pacquiao seeks PNP’s help, wants ‘forged’ PDP-Laban memo probed
Paalam ditches relative obscurity by eliminating reigning Olympic gold winner
Anxiety over paltry lockdown aid: ‘We will die of hunger’
Don't miss out on the latest news and information.