Obama calls for irregular forces to lay down arms in Ukraine 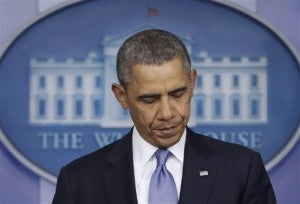 WASHINGTON – US President Barack Obama urged his Russian counterpart Vladimir Putin on Monday to press pro-Moscow groups to lay down their arms in Ukraine amid escalating tensions.

Obama used the phone call requested by Moscow to express his “grave concern about Russian government support for the actions of armed, pro-Russian separatists who threaten to undermine and destabilize the government of Ukraine,” the White House said.

“The president emphasized that all irregular forces in the country need to lay down their arms, and he urged President Putin to use his influence with these armed, pro-Russian groups to convince them to depart the buildings they have seized.”

Washington said earlier it was consulting European allies and hinted that more sanctions on Russia’s economy could be coming, to punish what it sees as Moscow’s sponsorship of pro-Russia violence in eastern Ukraine.

In the latest in a string of tense phone calls between the two leaders, Obama “reiterated the importance of Russia withdrawing its troops from Ukraine’s border in order to defuse tensions.”

He also hailed Ukraine’s “remarkable restraint” in the face of what Washington brands as Russian meddling in its neighbor.

The Kremlin had earlier said Putin told Obama the charges of interference were “unfounded.”

The White House and the State Department signaled fresh sanctions could be coming for Russia over what Washington says are provocations in eastern Ukraine, including the seizure of administrative and police buildings by Moscow-backed armed groups.

And Obama pointed out to Putin “Russia’s growing political and economic isolation as a result of its actions in Ukraine and made clear that the costs Russia already has incurred will increase if those actions persist,” the White House said.

In a sign of growing tensions in the worst East-West crisis since the Cold War, a Russian Su-24 fighter jet made several low-altitude, high-speed passes near the USS Donald Cook cruise missile destroyer over the Black Sea.

EU foreign ministers also announced they were expanding the list of 33 Ukrainian and Russian officials and business leaders hit by asset freezes and visa bans for their role in the Ukraine crisis — though the bloc stopped short of harsher measures ahead of a Geneva meeting of top EU, US, Russian and Ukrainian officials this week.

Obama warned that while a diplomatic solution is still possible, “it cannot succeed in an environment of Russian military intimidation on Ukraine’s borders, armed provocation within Ukraine and escalatory rhetoric by Kremlin officials.”

Obama to Putin: US readying ‘additional costs’ over Crimea