Manobos inspired by Pacquiao win to keep on fighting for peace 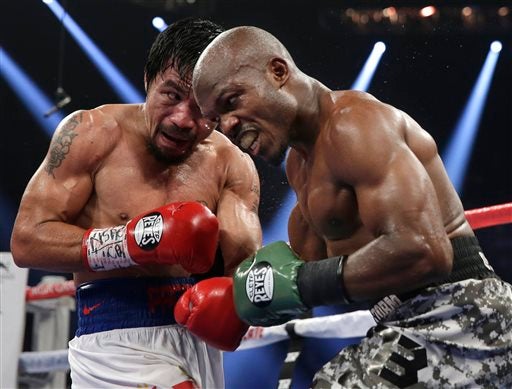 DAVAO CITY, Philippines — Sitting on a branch of a mango tree inside an evacuation center here, Manobo lumad Tuanob Talugmamo was all eyes on the screen as he watched Manny Pacquiao’s boxing bout with Timothy Bradley.

“This is my first time to watch and I am so fortunate that it is live. And what’s more exciting is that he won,” Talugmamo, an evacuee from Talaingod, Davao del Norte, said.

For Teody Mansimuy-at, also an evacuee, it was his third time to see Pacquiao’s fight but also his first time to watch it live.

“Although there was no knockdown, the fight was still very exciting. First, we thought he will lose but he won,” Mansimuy-at said.

Mansimuy-at said that in their village of Palma Gil in Talaingod, they had to walk for more than five hours just to watch delayed telecast in another village.

“We usually walk a day before the fight and we watch in houses with television sets,” Mansimuy-at said.

Mansimuy-at and Talugmamo said they were inspired by Pacquiao’s victory.

“Like us who are demanding justice to human rights violations, we are inspired by Pacquiao’s victory to continue fighting until we get our demands,” Mansimuy-at said.

They also appealed to Pacquiao to help them as more than 1,500 Manobos from Talaingod have been living in makeshift shelter for weeks after leaving their homes for fear of being caught in the massive military operations launched against communist guerrillas.

“We are calling on the People’s Champ to help us. We will be very grateful if the pride ofMindanaowill be able to bring help for us who were displaced,” Mansimuy-at said.

Mansimuy-at added that Pacquiao could help them by joining the calls to pull military forces and installations out of their village.

The pay-per-view screening of Pacquiao’s match in the evacuation center was sponsored by the Save Pantaron Defend Talaingod Movement.

In Unkaya Pukan town in Basilan, members of the military’s 18th Infantry Battalion were in a fighting mode. This time, however, they were cheering for Pacquiao. On Friday, the soldiers clashed with Abu Sayyaf bandits, leaving two soldiers killed and at least 28 others hurt.

Perez said he decided to subscribe “pay-per-view” for his troops.

“I was frustrated but happy. I’ve wanted a knockout, it did not happen. If I had my way, Pacquiao should retire now while he is still the greatest boxer of all time,” Eric John Fernandez ofCotabatoCitysaid.

But other saw Pacquiao maturing into a wise fighter.  “While Pacquiao did not show his knockout power punches, at 35 he is still very much ready to fight (Floyd) Mayweather (Jr.). He was a better and wise fighter in that bout,” government employee Alejandro Hongco ofCotabatoCitysaid.