Paddling to a new life after storm 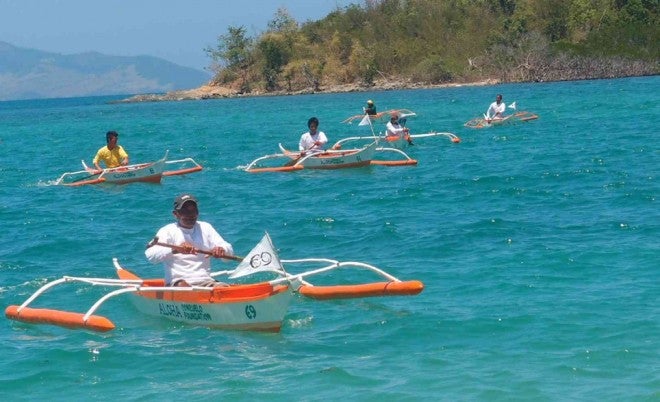 VICTIMS of Supertyphoon “Yolanda” in Barangay (village) Talotu-an in Concepcion town, Iloilo province, celebrate the start of a new life with a race aboard new boats. NESTOR P. BURGOS/INQUIRER VISAYAS

Unmindful of the midday heat, at least 20 fishermen vigorously paddled their new boats in a race to the shoreline amid cheers from other villagers on the beach.

The competition on March 31, which was won by two teenagers, was special for residents of Barangay (village) Talotu-an in Concepcion, one of the  northern towns of Iloilo province that were devastated by Super Typhoon “Yolanda” on Nov. 8 last year.

Talotu-an, one of the three villages on Pan de Azucar Island, was the beneficiary of 65 new boats under Project Haiyan Operations for Protection and Empowerment (Hope) of the Honolulu-based Consuelo Zobel Alger Foundation, in partnership with  Daughters of Charity, a religious order.

Yolanda destroyed 477 of the 688 houses in the village while the rest were damaged, according to village chief Leo Ferraris. Talotu-an can be reached in one hour by boat from the mainland of Concepcion, 109 kilometers northeast of Iloilo City.

Many of the residents live in shacks built from materials retrieved from the typhoon debris and are struggling to recover through the help of mostly private donors.

“If there was no help from private organizations, we didn’t know what would happen to us because no one was fishing as most of the boats were destroyed or damaged,” one of the residents, Danilo Chavez, said.

The $3.3-million Project Hope is being implemented for the next two and a half years in Concepcion, Cuartero town in Capiz province, Coron town in Palawan province and Bantayan Island in Cebu province as well as the provinces of Leyte, Samar and Eastern Samar,  according to Jon Matsuoka, president and chief executive officer of Consuelo Foundation.

It has livelihood, infrastructure, capacity-building and other components.

“This project is a long-term commitment. We are rebuilding communities from the rubble and building them better,” Matsuoka told the Inquirer on the sidelines of the boat turnover ceremony.

He said major banks, insurance companies, businesses and residents of Hawaii responded to the “Aloha for the Philippines” campaign and donated $1.3 million for the Yolanda victims.

“This was the biggest fund raised for a cause by the community,” Matsuoka said.

The amount included $600,000 channeled through  Filipino Community Center and $700,000 to  Consuelo Foundation, which, in turn, matched the donations with its own $2-million assistance.

Philanthropist Consuelo Zobel Alger, a member of the Zobel de Ayala clan, formed the foundation in 1988, focusing on helping disadvantaged children and women in the Philippines and Hawaii. She died on

Hawaii has a strong affinity with the Philippines. About 250,000 Filipinos are residing in the US state, which has a population of about 1.3 million. Filipinos also played a major role in the development of Hawaii, Matsuoka said.

Consuelo Foundation selected the beneficiary communities that  were among those that received less assistance from the government and private donors. Their capacity to successfully implement the programs was also evaluated.

Aside from the boats, the foundation plans to provide housing aid and livelihood, especially for women, as well as to help repair Talotu-an Elementary School.

An engineer with expertise on micro utilities will be sent to help develop water purification systems and telecommunication facilities that can function even during calamities, Matsuoka said.

Hundreds of Talotu-an residents came to attend the  Mass that preceded the turnover ceremony. Children performed dance numbers to welcome guests and benefactors.

“Without these boats, there would be  widespread hunger here. They do not know us and we do not know them, but they help us and that has lightened our burden,” said Brenda Batsar, one of the fishing boat beneficiaries.