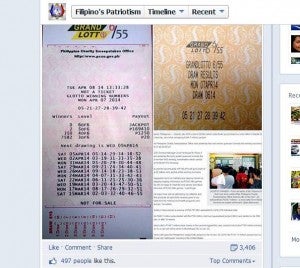 In an interview at Inquirer Radio 990AM on Friday, PCSO chairperson Margarita Juico called as “malicious” the viral Facebook post that alleged their latest draw results was rigged.

The post even showed a copy of the draw results that showed zero winners for the jackpot, even though a female office worker from Muntinlupa claimed her winnings on Thursday.

Juico expressed frustration over the issue, saying that the photo of the results in the post came from their first server Pacific Online, which chose no winners.

“So this is not the case of no one winning the jackpot and then, immediately, someone winning it,” she said in Filipino.

Juico lamented the leaked report which only misled their bettors.

“It’s saddening that someone malicious just wants to make an issue, only to destroy the name of PCSO,” she said.

The P249.8 million jackpot winner is a 59-year-old female office worker from Muntinlupa City who claimed her prize on Thursday.