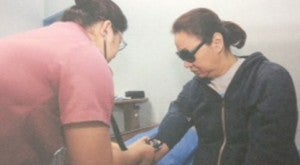 MANILA, Philippines — Janet Lim-Napoles, the alleged brains behind the pork barrel scam, underwent a biopsy procedure at the Ospital ng Makati on Tuesday for doctors to know if the tumor in her uterus is malignant or benign.

Her lawyer Bruce Rivera said the expected surgery might not happen in the next three days as the doctors have to wait for the results of the biopsy. Sample tissue was taken from her at 6 p.m. on Tuesday.

“They are still managing her blood sugar levels. And we were told that the doctors need the results of the biopsy before they begin the surgery,” Rivera said in a telephone interview.

He said the doctors took sample tissues from her endometrium and cervix to be subjected to laboratory tests.

Napoles, who is facing serious illegal detention charges filed by Benhur Luy, her cousin and former employee, was allowed by the Makati Regional Trial Court Branch 150 handling the case to be confined at the Ospital ng Makati and to undergo surgery for removal of a cyst in the uterus.

Earlier, doctors at the Ospital ng Makati projected that Napoles had to stay at the hospital for at least 26 days in the absence of any complications from the surgery.

Rivera said the taking of the sample tissues for the biopsy took 10 minutes but Napoles had to stop taking in food the whole day before the procedure.

Napoles asks court to allow her to choose her doctors