18 killed in blast in Pakistan capital 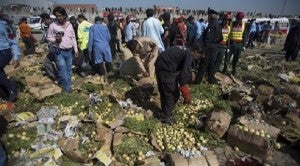 Pakistani investigators look for evidence at the spot of an explosion in Islamabad, Pakistan, Wednesday, April 9, 2014. AP

ISLAMABAD, Pakistan—A bomb ripped through a fruit and vegetable market on the outskirts of the Pakistani capital of Islamabad on Wednesday morning, killing at least 18 people and leaving dozens more wounded, officials said.

The death toll was likely to rise, according to Dr. Aisha Eisani, the spokeswoman for the Pakistan Institute of Medical Sciences where the dead and wounded were taken. She said that the hospital had received 18 dead bodies and had reports from police that more dead bodies were on the way.

The hospital was also treating 50 people who were wounded, Eisani said.

The bomb went off as morning shoppers were buying supplies at the market. The blast sent cartons of fruit and vegetables flying, and television footage from the scene showed blood stains on the ground, next to stray shoes and prayer caps.

The approximately five kilograms of explosives were hidden in a fruit carton, said a police official, Yasin Malik.

While such explosions happen frequently in Pakistani cities such as the northwestern city of Peshawar or the southern port city of Karachi, they are relatively rare in the capital.

Police and officers from the bomb disposal squad were scanning the area for more devices.