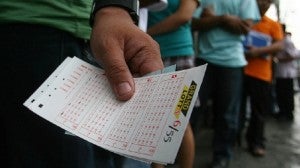 MANILA, Philippines—The Grand Lotto 6/55 has produced the biggest ever jackpot in the history of Philippine lottery—P741 million, won by a   “balikbayan” from New York City in November 2010.

The bettor’s ticket was bought in Olongapo, Zambales, a day prior to the draw.

Before Monday night’s draw the Grand Lotto pot was last won in January this year by a 26-year-old sari-sari store owner in Muntinlupa City.

Spending P60 for a ticket, the man hit the P155 million prize basing his picks on the birth dates and ages of family members.

In November 2013, the P148 million jackpot was won by a bettor in Binondo, Manila. A bettor from Luzon won P178.8 million in July of the same year, the winning ticket bought in Pangasinan.

A bettor also hit the P132 million jackpot in April 2013. The winner, a 72-year-old retiree from Cainta, Rizal, began betting in the national lottery in 1995.

In September 2012, two winners, one in Bataan and the other in Southern Leyte, split the nearly P300 million pot. In February the same year, two lucky bettors split the more than P300M jackpot.

Another bettor won the P163 million jackpot in July of that same year.—Inquirer Research