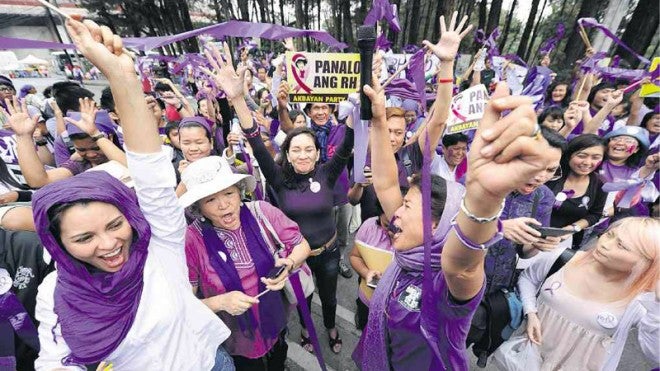 PURPLE BONDING. Supporters of the reproductive health law whoop it up outside the Supreme Court compound in Baguio City moments before the tribunal declared Republic Act No. 10354, or the Responsible Parenthood and Reproductive Health Act of 2012, “not unconstitutional.” EV ESPIRITU/INQUIRER NORTHERN LUZON

BAGUIO CITY, Philippines—There was jubilation on both sides.

Cheers from pro-reproductive health (RH) law advocates who wore purple rang out in front of the Supreme Court building here when the tribunal’s spokesperson announced Tuesday that the high court had unanimously declared the Responsible Parenthood and Reproductive Health Act of 2012 “not unconstitutional.”

But the Supreme Court, on its annual summer session here, rejected eight of the law’s provisions, something that Catholic Church leaders and other opponents of the law found laudable. They also claimed victory.

The provisions include those pertaining to providing minors access to contraceptives without parental consent; penalizing healthcare providers for refusing or failing to disseminate information about RH programs and requiring parental consent from a minor in nonemergency situations; and penalizing public officers who refuse to support RH programs.

“The [high] court, after a scrutiny of the various arguments and contentions of the parties in the foregoing consolidated cases consisting of 14 petitions challenging its constitutionality and two interventions to uphold its constitutionality, unanimously held that Republic Act No. 10354 is not unconstitutional based on the grounds raised, except with respect to [eight] items,” Supreme Court spokesman Theodore Te said, reading a prepared statement.

Opponents have 15 days to ask the court to reconsider its ruling, Te said.

It was Associate Justice Jose Catral Mendoza who penned the opinion of the court on the petitions.

The ruling came more than a year after the suspension of the law’s implementation following petitions from Pro-Life Philippines Foundation Inc. and other Catholic Church groups to declare the law unconstitutional.

Catholic groups assailed RA 10354, signed by President Aquino in December 2012, because it would allow the state to use public funds to educate the youth on RH matters and provide couples with contraceptives.

Catholic leaders considered the law an attack on the Church’s core values and said it would promote promiscuity and destroy life. The government said it would help the poor manage the number of children they have and provide for maternal healthcare.

Aquino had certified the legislation as urgent, aiming to reduce maternal deaths and promote family planning in the impoverished country that has one of Asia’s fastest-growing populations.

The UN Population Fund counts 3.4 million pregnancies in the Philippines annually; half are unintended and a third are aborted, often in clandestine and unsafe procedures. The fund says 11 women in the country die of pregnancy-related causes every day.

A briefer from Te included a footnote explaining the use of “not unconstitutional” in the high court’s decision. It said the double negative was used because “all laws are presumed to be constitutional and the burden of showing that a law is unconstitutional is on the petitioner.”

“Failing that burden, the declaration is in the double negative—not unconstitutional,” the briefer said.

Te did not release a copy of the decision but during the briefing, he read its dispositive portion, saying that the petitions were “partially granted.”

Asked whether the ruling meant that the high court had lifted the status quo ante order it issued on RA 10354 that suspended the law’s implementation, Te told the media to just wait for the release of the text of the decision.

The eight provisions (and the provision in the RH implementing rules and regulations) that were declared unconstitutional by the high court were the following:

— Section 7, which (a) requires private health facilities and nonmaternity specialty hospital and hospitals owned and operated by a religious group to refer patients, not in an emergency or life-threatening case, as defined under Republic Act No. 8344, to another health facility which is conveniently accessible and (b) allows minor-parents or minors who have suffered a miscarriage access to modern methods of family planning without written consent from their parents or guardian; (RA 8344, otherwise known as the no-deposit law, prohibits the “no deposit, no admittance” rule in emergency or serious cases);

— Section 23 (a) (1) as it punishes any healthcare provider who fails or refuses to disseminate information regarding programs and services on reproductive health regardless of his or her religious beliefs;

— Section 23 (a) (2) (i) as it allows a married individual, not in an emergency or life-threatening case, as defined under RA  8344, to undergo RH procedures without the consent of the spouse;

Section 23 (a) (3) as it punishes any healthcare provider who fails and/or refuses to refer a patient not in an emergency or life-threatening case, as defined under RA 8344, to another healthcare service provider within the same facility or one which is conveniently accessible regardless of his or her religious beliefs;

— Section 23 (b) as it punishes any public officer who refuses to support RH programs or shall do any act that hinders the full implementation of an RH program, regardless of his or her religious beliefs;

— Section 3.01 (a) and (j) as it uses the qualifier “primarily” for contravening Section 4 (a) of the RH law and violating Section 12, Article II of the Constitution; and

— Section 23 (a) (2) (ii) as it penalizes a health service provider who will require parental consent from the minor in nonemergency situations.

For Section 7 (a) and (b), the voting was 11-4 each, with Chief Justice Ma. Lourdes Sereno, Associate Justices Bienvenido Reyes, Estela Perlas-Bernabe, and Marvic Leonen voting for these subprovisions as not unconstitutional.