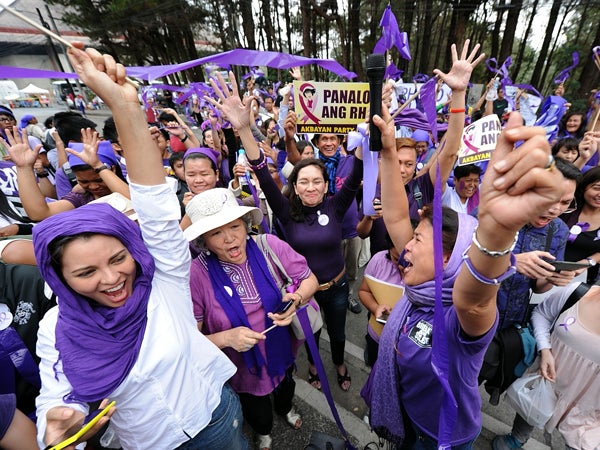 Advocates of the Reproductive Health Law waited for more than a day for the Supreme Court to rule on the constitutionality of the RH law, and as the court sat en banc at its summer courthouse in Baguio on Tuesday April 8 , actress Giselle Toengi found time to shoot a selfie with the crowd. This was moments before the court decided that the law was constitutional, and the purple crowd went wild. Some broke into tears. EV ESPIRITU/ INQUIRER NORTHERN LUZON

BAGUIO CITY, Philippines—The Supreme Court upheld Tuesday the constitutionality of the Responsible Parenthood and Reproductive Health Act of 2012 but nullified some of its provisions.

A total of 14 petitions were filed in the high court and a series of oral arguments was held to determine the constitutionality of the controversial birth control law that supporters said would transform the lives of millions of poor Filipinos, in a stunning defeat for the powerful Catholic Church.

The Supreme Court first stopped the implementation of the law for four months after it took effect on March 18, 2013. It issued a status quo ante order after Pro-Life Philippines Foundation Inc. and Catholic Church groups questioned the law, saying it violated the constitutional provisions guaranteeing the right to life.

The law requires government health centers to hand out free condoms and birth control pills, as well as mandating that sex education be taught in schools.

The Catholic Church had until Tuesday led a successful campaign for more than 15 years against any form of family planning laws in the Philippines.

Among the provisions declared unconstitutional are:

• Section 7 which is about access to family planning, as well as Section A and A of its implementing rules and regulations . Section A requires private health facilities and non-maternity specialty hospitals and hospitals owned and operated by a religious group to refer patients, not in an emergency or life threatening case to another health facility which is conveniently accessible. Section B allows minor-parents or minors who have suffered a miscarriage access to modern methods of family planning without written consent from their parents or guardians;

• Section 23 Punishable Acts (a) (1) and corresponding provision in the RH-IRR particularly Section 24 insofar as it punishes any health care provider who fails or refuses to disseminate information regarding programs and services on reproductive health regardless of his or her religious beliefs;

• Section 23 (a)(2)(i) and a provision in the IRR with regard to allowing a married individual, not in an emergency or life –threatening case to undergo reproductive health procedures without the consent of the spouse;

• Section 23(a)(3) and the provision in the IRR which punishes any health care provider who fails and/or refuses to refer a patient not in an emergency or life threatening case to another health care service provider within the same facility or one which is conveniently accessible regardless of his or her religious beliefs;

• Section 17 on Pro bono services of indigent women and corresponding provision in the IRR regarding the rendering of pro bono reproductive health service, insofar as they affect the conscientious objector in securing PhilHealth accreditation;

• Section 3.01(a) and (j) of the IRR insofar as it uses the qualifier “primarily” for contravening Section 4(a) of the RH Law specifically the definition of abortifacient and violating Section 12 on right to life and protection of life from conception.

• Section 23 (a)(2)(ii) insofar as it penalizes a health service provider who will require parental consent from the minor in not emergency or serious situation.

President Benigno Aquino defied church pressure and signed the law into effect in December 2012, but the Supreme Court quickly suspended it after church groups filed petitions arguing it was unconstitutional.

“This monumental decision upholds the separation of church and state and affirms the supremacy of government in secular concerns like health and socio-economic development,” Representative Edcel Lagman, the principal author of the law, said immediately after the verdict.

“A grateful nation salutes the majority of justices for their favourable ruling promoting reproductive health and giving impetus to sustainable human development.”

The Catholic Church, which counts over 80 percent of the country’s 100 million population as members, had led street protests denouncing the law as “evil”, and at one point in its opposition campaign threatened Aquino with excommunication.

Church leaders have helped lead two revolutions that toppled unpopular presidents in recent Philippine history, and they continue to insist they have a right to influence the parliamentary and legal branches of government.

Another example of its enduring influence is that the Philippines is the only country where divorce remains illegal.

Nevertheless, many people across the sprawling archipelago have embraced less conservative views in recent decades.

A recent survey carried by the respected Social Weather Stations polling group said about 84 percent of Filipinos agreed that the government should provide free family planning options such as contraceptives.

Women’s rights groups and other supporters of the law say it will be a powerful tool in fighting poverty and cutting the birth rate of 3.54, one of the highest in the world.

More than a quarter of the population live on the equivalent of 62 cents a day, according to the government, and experts say there is an urgent need to provide free reproductive medical services that the poor can not otherwise afford.

More than a third of Metro Manila’s 14 million population live in sprawling slums, according to a 2010 World Health Organization report, and many of them do not have access to proper sanitation, let alone health centres.

According to the British medical charity Merlin, which has backed the passage of the law, 14-15 mothers die daily in the Philippines in complications related to child birth.