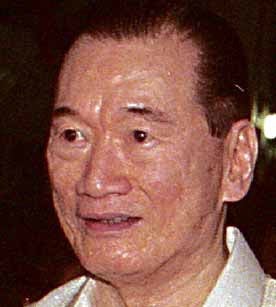 MANILA, Philippines—Media magnate and philanthropist Emilio T. Yap, chair of Manila Bulletin Publishing Corp. and chair emeritus of Philippine Trust Co., passed away on Monday at the age of 88. The cause of death was not disclosed.

Manila Bulletin confirmed Yap’s passing in a disclosure to the Philippine Stock Exchange on Monday.

The official account of Manila Bulletin also posted on Twitter: “Dr. Emilio T. Yap, The @manila_bulletin Chairman of the Board, passed away this noon, April 7, 2014 at the age of 88.”

The newspaper said funeral services would be announced later.

Yap died a day before Manila Bulletin was to hold its annual thanksgiving party for clients and advertisers at Puerta Real in Intramuros, prompting the newspaper to cancel the event.

The businessman, who would have turned 89 on Sept. 24, had led the board of Manila Bulletin since 1984 and was also chair of Manila Hotel Corp. and Centro Escolar University.

Since turning 75 in 2000, Yap stopped celebrating his birth anniversary and instead began the annual tradition of donating to various charitable causes in the Philippines and around the world. Among his humanitarian projects was the medical center building at National Press Club of the Philippines.

Forbes magazine estimated Yap’s net worth at about $1.4 billion in a July 2013 article. He was ranked last year as the 13th-richest man in the Philippines. The magazine estimated that the bulk of Yap’s wealth came from his two-third stake in Philtrust Bank Co.

A statement by Manila Bulletin described Yap as “widely honored and recognized for his professional and charitable contributions. [He] received over 400 awards and citations from the government [and] professional and civic organizations. He was conferred 23 honorary doctoral degrees from universities in the Philippines and abroad.”

Under Yap’s leadership, Manila Bulletin became a public corporation in 1990. The newspaper was originally founded as the Daily Bulletin in 1900.—With a report from Frances Mangosing, INQUIRER.net