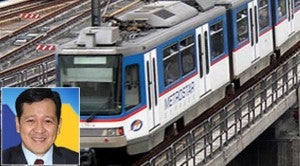 Malacañang will not block a House investigation of charges that an administration ally tried to extort $30 million from a Czech train builder, a Palace official said on Saturday.

Valte also denied that the Department of Transportation and Communications (DOTC) ignored the charges against Vitangcol and De Vera.

Bayan Muna Rep. Neri Colmenares and Navotas Rep. Tobias Tiangco have asked the House committee on good government and public accountability to summon De Vera and compel him to explain the allegations of Czech Republic Ambassador to the Philippines Josef Rychtar and Inekon CEO and chair Josef Husek that he demanded $30 million on behalf of Vitangcol in exchange for a contract for 48 train cars for MRT 21 months ago.

Valte did not respond to the question of whether Malacañang would order Vitangcol and De Vera to face the House investigators.

In a radio interview, she rejected the observation that the scandal has tarnished the image of the Aquino administration, which came to power in 2010 promising good government.

She said the observation was wrong because President Aquino himself ordered the National Bureau of Investigation to look into the allegations of Rychtar and Husek.

Secretary Leila de Lima said on Friday that the NBI had completed the investigation and was just reviewing the findings.

“It [would] have tarnished [the image of the administration] if there [had been no] investigation,” Valte said on state radio dzRB.

“But it was clear from the start, when this came out, [that] President Aquino ordered that proper attention be given to these claims,” she said.

She did not say, however, what the DoTC did to deal with the alleged attempt at extortion that happened when the agency was still headed by Manuel Roxas II. Roxas is now President Aquino’s secretary of the interior and local government.

Vitangcol, who had denied the allegations, went on leave to give way to the investigation, which started at the height of the scandal in July last year.

The role of Gardner in the investigation was to determine whether the auction for the MRT coach contract was rigged in favor of any group, Abaya said.

No evidence of rigging was found and Vitangcol was eventually cleared of wrongdoing, enabling him to return to work.

But the investigators failed to question De Vera, Abaya said.

“We tried to invite him to the administrative investigation but we weren’t able to get in touch with him,” Abaya said in a text message.

He said the DOTC, too, was keen on determining the truth about the allegations involving Vitangcol and De Vera may be able to give investigators the information they needed.

“We would be very interested in what he would say,” Abaya said.

“We are also hoping that the NBI [has] gotten in touch with him, because the criminal investigation is with them,” he said.

Colmenares and Tiangco said on Friday that De Vera was “essential” to a face-off between Rychtar and Vitangcol in the controversy.

De Vera could provide crucial testimony at the inquiry because he was the alleged go-between of Vitangcol to Inekon, they said.

In an affidavit that he submitted to the NBI, Rychtar said De Vera behaved like he was an “envoy” of Vitangcol at an official dinner and he was straightforward, suggesting Inekon pay $30 million to secure the contract for train cars.

In an affidavit submitted to the House, Husek said he and Rychtar first met with the MRT group composed of Vitangcol, De Vera and Manolo Maralit on July 9, 2012, over dinner at Carpaccio restaurant in Makati City. He said they agreed to another meeting in Rychtar’s residence the next day.

In that meeting, which Vitangcol skipped, De Vera suggested that Inekon could win the contract for the train cars if it paid $30 million “to an unknown entity.”

Husek said he was shocked, as Inekon did not expect “this way of doing business.”

He said he and Rychtar rejected the demand, making De Vera withdraw to consult someone by mobile phone.

After that consultation, De Vera lowered the demand to $2.5 million, Husek said, adding that he and Rychtar rejected the proposal.

The following day, Husek’s group met with Vitangcol at the MRT chief’s office. There, Husek said, Vitangcol not only pressed De Vera’s proposal but also offered a 60-40 joint venture between Inekon and individuals picked by Vitangcol who would assume MRT’s maintenance contract.

Husek said Inekon rejected both offers. “This made Mr. Vitangcol apparently upset and in a few minutes we left his office without any follow-up on the negotiations,” he said.

Husek said that hours later Rychtar received a text message from Maralit informing him that Vitangcol and De Vera were furious about Inekon’s rejection of their “suggestions” and advising him that MRT “would never do any business with Inekon Group in the future.”

In October 2012, MRT’s maintenance contract with Sumitomo expired, and this was transferred to CB&T and PH Trams, which includes De Vera as one of its incorporators. Rychtar said in one interview that Maralit was “part” of PH Trams.

In March 2012, the DoTC bid out a contract for the purchase of 48 new MRT coaches, which was eventually won by China’s CNR Dalian Locomotive & Rolling Stock.

Rychtar said Inekon did not take part in the bidding because the terms were “not objective and the price and terms of delivery unrealistic.”

Later, Rychtar said he received two sets of “white paper” that described in “precise terms a fraud organized for the new coach bidding by persons from the private sector as well as from state institutions” and the “technical parameters of the scam inside the Terms of Reference of the Bidding.”

The allegations prompted the DoTC administrative review, complicating the postqualification process for the Chinese company, which was declared the only eligible bidder for the P3.77-billion MRT capacity expansion on June 11 last year. Dalian was eventually declared the winner of the bidding early this year.