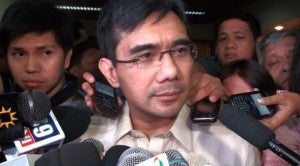 BAGUIO CITY, Philippines—Children aged 13 who commit serious criminal offenses would have to stand trial under a proposed amendment to the criminal code now being discussed in Congress, according to the House committee on justice which held a public consultation here on Thursday.

Except for changing the age of “criminal responsibility” from 15 to 13, the amendments would not change the juvenile justice system in any way, said Iloilo Representative Niel Tupas Jr., the committee chair.

It may not even be enforced until after the term of President Aquino ends in 2016, when the measure is expected to pass Congress, Tupas said.

The consultation addressed Book 1 of a new crime codification measure (House Bill 2300 or the proposed Philippine Code of Crimes) and a bill that would require prosecutors to coordinate with the police in the early stages of a criminal investigation (HB 2032 or the Criminal Investigation Act of 2013).

Both measures intend to speed up the judicial process and unclog dockets.

Although HB 2032 was expected to be more contentious, it was HB 2300 which has drawn more objections when the bills were introduced in consultations around the country, Tupas said.

The juvenile justice system prevents the government from treating child offenders as ordinary criminals, even those older than the minimum age of criminal liability.

Instead, the law enforces a program of counseling and retraining for offenders younger than 15, unless the government proves that the child or teenager was aware that he or she had committed a serious crime.

Even then, the law requires the government to place a child convicted of a heinous crime under the care of the Department of Social Welfare and Development.

“The juvenile justice law is different. It protects the rights of children [who find themselves in conflict with the law]. That will not be touched [by the crime code],” Tupas said.

But he said the police had lobbied Congress to lower the age of criminal liability, which it failed to do when RA 10630 was enacted.

Evidence provided by the police has convinced the House justice committee that organized criminals have used children as young as 13 to avoid prosecution.

This was the reason it  incorporated the new age of criminal responsibility in the updated crime code, Tupas said.

Most convicted children get suspended sentences and are remanded to the custody of their families who have the final say on the remediation of their children, he said.

“The problem in some instances is that the families themselves encourage bad behavior…. So what if the family decides against pursuing the government counseling process? Then it ends there,” he said.