MANILA, Philippines – When 54-year-old Cleofe Navarro boarded the Metro Rail Transit (MRT) carrying her granddaughter Ashley Anne Nepomuceno, there was a momentary silence among the passengers.

A couple of women stood up and gave away their seats. Nanay Cleofe, cradling the six-year-old child,  smiled shyly. “Pasensya na po kayo,” she said, seemingly embarrassed at her predicament.

In her arms was a child with limbs covered in bandages, head bleeding despite the gauze.

A visibly weak Ashley wailed in pain while Nanay Cleofe positioned her away from the heat of the sun.

Suddenly, a woman sitting across her handed over what seemed to be money. A couple of minutes later, one or two other good Samaritans did the same. 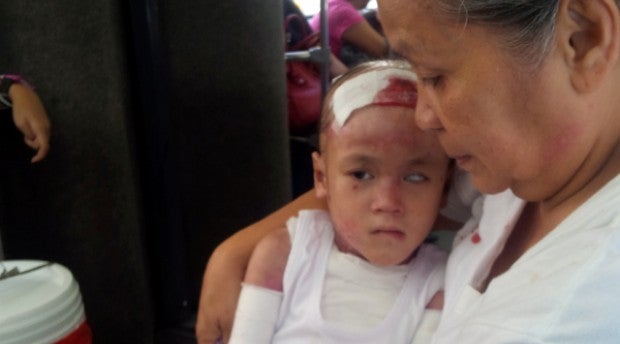 Another one offered her a wad of tissues to wipe away the blood.

It was at that point that this reporter started a conversation with Nanay Cleofe.

They had just been to St. Luke’s Medical Center where Ashley was supposed to undergo electron microscopy, a test that would have showed the doctor the status of her cancer.

In a phone interview the next day, Nanay Cleofe told INQUIRER.net that they rode the MRT on their way to the Philippine General Hospital (PGH) where Ashley is undergoing physical therapy. The six-year-old child collapsed the last time she had chemotherapy and was trying to regain strength for the next one.

Her grandmother said that they were not able to avail of the electron microscopy because she only had P3,000 in her wallet. They needed P7,200 for the procedure, which was already a discounted price. St. Luke’s was not willing to accept a promissory note for the laboratory exam.

Nanay Cleofe was able to raise P1,200 from those who gave them money at the MRT.

She said she really wanted to ask for help but was too embarrassed. Fortunately, the people were moved by Ashley’s condition, prompting them to contribute.

Nanay Cleofe said it was not the first time that it happened.

Six times a week, the 54-year-old grandmother would carry Ashley from their home in Angeles, Pampanga to St. Luke’s in Quezon City and then the PGH.

She would often ride the MRT and there were days when people, without being asked, would hand over money to help in Ashley’s medical bills.

Nanay Cleofe was quite desperate that day because they needed the money for the electron microscopy and because Ashley had started bleeding after complaining of feeling pain in her head. She said the wound was from a type of blood transfusion procedure.

Until now they have yet to raise the needed money for the said laboratory test.

Nanay Cleofe said they already have a lot to thank for, especially since Ashley’s six chemotherapy sessions, two of which are already finished, are covered by the Philippine Charity Sweepstakes Office.

In addition to meeting her favorite television host Vice Ganda last year, Ashley was also featured in the show “Wish Ko Lang.” However, that was back in 2010 when she was not yet diagnosed with cancer.

Now, they have to raise at least P6,500 per week for skin medication.

While the bone marrow cancer can be cured after four more sessions of chemotherapy, epidermolysis bullosa is a lifetime illness.

Younger patients who suffer from it are called “butterfly children” because of their fragile condition. Among the most famous of these is Johnny Kennedy, who was the subject of the documentary “The Boy Whose Skin Fell Off.” Kennedy died in 2003 because of skin cancer caused by the said disease.

The whole Navarro family is working to fund Nepomuceno’s medication. Navarro said her two younger children have stopped schooling to help. Her son now drives their tricycle while her middle child works as a sales lady. Her husband is a wood carver who earns P1,800 a week.

Ashley’s parents, the mother being Nanay Cleofe’s daughter, are currently unemployed after their contract at the Clark Freeport Zone, where they did laundry work, expired. They are waiting to be re-hired by their previous employer at a call center.

(If our money is not enough, I also do the laundry and ironing for friends who are rich. I am able to earn P1,000 a day.)

Unlike other children, Ashley could not go outside and play. She does not have the strength to do so and should not be exposed to the sun.

But Nanay Cleofe said Ashley is at her best right now. She used to be in worse pain, suffering from the occasional nose bleed and severe blistering.

“Her skin looks beautiful now,” she said in Filipino.

Lately, however, the summer heat has been taking its toll on Ashley, with their old air conditioning unit destroyed by typhoon Ondoy’s flood waters in 2009.

Sometimes, Nanay Cleofe will have to rush Ashley to a small town hotel in the middle of the night so the child could sleep in peace.

Another troubling possibility they are facing is Ashley’s skin disease resulting in blindness.

In the end, Ashley does not mind all the hardships and sacrifices that her family are going through.