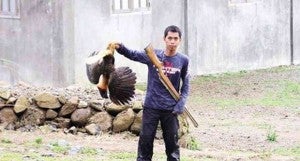 THE WILD Bird Club of the Philippines (WBCP) took this photograph of an Adams town bird hunter displaying a dead hornbill in Ilocos Norte which enraged bird advocates when it was posted online. WBCP FACEBOOK PAGE

LAOAG CITY—The Department of Environment and Natural Resources (DENR) is looking into reports of illegal bird hunting in Adams town in Ilocos Norte, an emerging ecotourism destination recently declared as the “last frontier of dipterocarp forest.”

A team was sent to Adams on Wednesday by the DENR’s community environment and natural resources office of neighboring Bangui town following the online outrage over a local hunter who displayed a dead juvenile hornbill he allegedly shot with an air gun.

The hunter’s photograph was taken by members of the Wild Bird Club of the Philippines (WBCP) who were visiting the area. The photo was posted on a social networking site on Monday.

The man in the photograph was later identified as Mikel Dato, son of town councilor Julian Dato and the son-in-law of Adams Vice Mayor Wagner Poking.

On Tuesday, Dato’s parents met with Insp. Clemente Ceralde, acting Adams police chief, to apologize for the incident. “Our son [who is in his mid-20s] feels sorry about it. We already talked to him and advised him not to do it anymore,” the parents said.

But police said charges of illegal hunting may be filed against the young Dato once a formal complaint is filed.

“It’s sad to see these things happening in a place that is gearing for ecotourism,” said Mike Lu of WBCP. He said his friends took Dato’s photographs and posted these online.

The online photographs had drawn rebukes in online commentaries since Monday, including criticisms of local government officials for not acting quickly to curb bird poaching in Adams.

The photos also documented evidence that slash and burn farming was rampant in the area.

Ceralde said a campaign must be launched to educate more people about environment laws and those on wildlife conservation and protection.