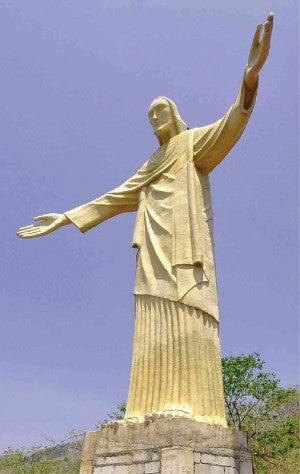 Lying at the foot of the Caraballo mountains, Natividad has become Pangasinan province’s fast-emerging pilgrimage site and ecotourism destination.

The town features Sky Plaza, a park built on top of a hill in Barangay Batchelor East, and a waterfall, which is 2 kilometers away.

Sky Plaza has a two-story octagon-shaped multipurpose hall, a chapel, a 120-meter zip line, picnic tables and wide parking spaces. It also serves as base of a 287-step concrete stairway that leads to a grotto of the Virgin Mary in the upper side of the hill, and a little higher behind it, to a 30-foot Holy Cross.

From the cross is a winding trail leading to the mountaintop, where a 40-foot statue of Christ the Redeemer, called “Ayat ni Apo Jesus” (God’s Love) stands.

Jesus Christ’s fiberglass statue, which was erected in June last year, is 1,108 meters above sea level, overlooking the town (population: 22,713 as of 2010 census).

According to Mayor Rodrigo Rafael, except for the P50 fee for the use of the zip line, no other fees are collected. Parking and the use of picnic tables are free.

“Last year, the Maundy Thursday Mass for the Diocese of Urdaneta was held here. So, thousands of people from 24 parishes were here,” Rafael said.

At that time, he said, only the grotto and the Holy Cross were at the hilltop. “I’m sure this Holy Week, thousands of pilgrims will be coming here,” Rafael said.

Liza Pugal, the municipal tourism officer, said since 2010, when the development of Sky Plaza began, tourists, including foreigners, have been arriving here every day.

“Tourists have always enjoyed coming here, appreciating the park’s ambience and nature. In December alone, we had an average of 1,000 tourists a day,” Pugal said. 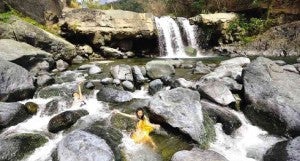 From Sky Plaza, tourists may also visit and swim in Maranum Falls and enjoy its clear, cool water.

The waterfall can be reached through a 2-km paved road along the Viray River. At the end of the road, where a trail to the waterfall begins, is a wide parking space.

Even at noon, one can take a leisurely hike to the falls under the cool shade of thousands of alibangbang (Iloco for “butterfly”) trees lining the hillside.

Pilgrims and tourists who want to stay overnight in Sky Plaza will have to rent rooms in resorts along the Viray River, Pugal said. “They should also bring their own food because we do not have restaurants yet in the area.”

Houses around the town hall have been offering bed and breakfast accommodation at reasonable prices. “We are a small town but we are ready for tourists,” Rafael said.

A hotel is being built in Sky Plaza to prepare for the influx of pilgrims in the future.

Rafael said Pangasinan Rep. Marlyn Primicias-Agabas has also been helping him secure funds from the Tourism Infrastructure and Enterprise Zone Authority (Tieza) for the improvement of the road and trail to Maranum Falls.

Pugal said she sees the full development of the area in the next five years, with the completion of the hotel and other tourism structures in the park.

“I hope that by then, our place can already be a part of the tourism itinerary in Pangasinan,” Pugal said.