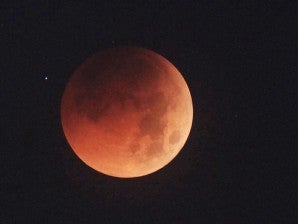 MANILA, Philippines—April offers a number of celestial spectacles for Filipino stargazers, including a total eclipse of the moon on the 15th and a meteor shower on the 21st, according to the astronomical division of the state weather bureau.

On April 15, the total lunar eclipse, usually seen as a red coloration on the moon, will be visible in the country but only as a penumbral eclipse, or partial shadow, on its last stages, the Philippine Atmospheric, Geophysical and Astronomical Services Administration said.

“Observation of the eclipse will be difficult due to the position of the moon, which is just above the eastern horizon,” Pagasa said in its monthly astronomical diary.

The entire event will be best seen in countries in western Africa, western Europe, the Americas, Australasia and eastern Asia, it added.

In the Philippines, the eclipse will be seen for about 25 minutes: from the time the moon rises at 6:12 p.m. and when the eclipse ends at 6:37 p.m.

“Lunar eclipses are safe to watch and observers need not use any kind of protective filters for the eyes. A pair of binoculars will help magnify the view and will make the red coloration of the moon brighter,” Pagasa said.

On April 29, an annular eclipse of the sun, in which a portion of its surface is visible as a ring surrounding the dark moon, will occur, but the event will not be visible in the Philippines, Pagasa said.

The spectacle will be visible in French Southern and Antarctic Islands, Wilkes Land (Antarctica) and Australia, it added.

From the evening of April 21 to the early morning of April 22, stargazers will be treated to the annual Lyrids meteor shower, which will generate about 12 meteors per hour under optimal conditions, Pagasa said.

The Lyrids have been observed for more than 2,600 years, and Chinese records show that “stars fell like rain” during the meteor shower of 687 B.C., Pagasa said.

“However, in recent times, the Lyrids have generally been weak. The shower typically generates a dozen meteors per hour under optimal conditions with a brief maximum that lasts for less than a day,” Pagasa said.

The shower’s peak this year will be in progress on April 21 to the predawn of April 22. “Although not numerous, Lyrids are bright and fast meteors,” Pagasa said.