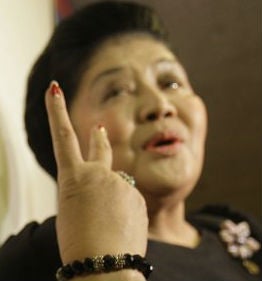 Petitioners said the Sandiganbayan, whose decision was affirmed by the high court in 2012, erred in issuing the ruling in favor of the government.

“We agree with the view of the Office of the Solicitor General…that the issue has already been raised and exhaustively discussed in our April 2012 ruling,” the high court said.

The Arelma funds represented assets of the former strongman originally worth $2-million deposited with Merrrill Lynch Securities in New York in 1972 under the Arelma S.A., a Panamanian corporation. The fund has increased from $2 million to about $40-million.

Bongbong Marcos, in his motion argued that the Sandiganbayan has no jurisdiction to hear the forfeiture case on the Arelma property.

The high court said the anti-graft court “ found that the totality of assets and properties acquired by the Marcos spouses was manifestly and grossly disproportionate to their aggregate salaries as public officials and that petitioners were unable to overturn the prima facie presumptions of ill-gotten wealth,”

Presidential Commission on Good Government Chairman Andres Bautista, in a statement said “it is gratifying to be able to share this piece of good news with our people.”

“While there are frustrating delays and obstacles in the course of our work, the commission remains steadfast in its commitment to restore what was taken from the public coffers.”