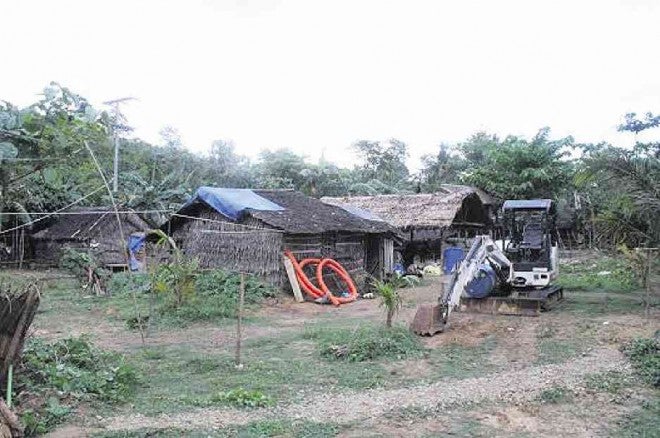 A BACKHOE and other mining equipment were found in the compound allegedly used by the personnel of the Sagip Kalikasan Task Force of the Camarines Sur provincial government. Juan Escandor Jr./ Inquirer Southern Luzon

CARAMOAN, Camarines Sur—The National Bureau of Investigation charged two members of an environment watchdog unit with murder for the death of four small-scale miners on March 22 in Barangay (village) Gata on Lahuy Island.

Witnesses identified the two as the ones who shot brothers Julio and Rene Labiano, 31 and 24, respectively; Reden Brondia, 35, and Salem Bertos, 24.

The witnesses made this claim in affidavits executed before a team of NBI agents led by Enrile who went to the island on March 25-26 to investigate the incident.

The NBI investigated the killing after Gata Barangay Chair Mercy Sueno sought its  assistance on March 24.

Reached for comment, SKTF head Fermin Mabulo denied the allegation against his subordinates.  He said the SKTF personnel arrived at the crime scene only after the shooting.

Mabulo, in a text message to the Inquirer on Saturday, acknowledged that Espares is one of his men but could not “recognize the name” of Beriso or Bay as among the personnel of SKTF.

Rivalry among the small-scale miners could be the cause of the shooting, Mabulo claimed.

He also alleged that Sueno, together with village councilman Maximiano Breis, controlled the mining industry in Gata before SKTF stopped the illegal mining activities there.

Mabulo said the crime was conveniently blamed on SKTF personnel because those involved in illegal mining on Lahuy wanted to drive them away from the island.

Sueno and Breis denied the allegation against them and turned the tables on Mabulo, claiming the SKTF chief was the one trying to control gold trading by buying the gold yield through Gigi Raygon at P900 per gram instead of the prevailing price of P1,200 per gram.

She said the miners who refused to sell to Mabulo through Raygon were ordered to stop their operations.

Testimonies of witnesses gathered by the NBI showed that SKTF personnel led by Beriso barged into the compound occupied by the  victims at past 7 p.m. of March 22 and had an altercation with victim Brondia over the mine tunnel the victims owned. At past

9 p.m., Espares also came in yelling, and the shooting started.

Elmer and Panchito Labiano, cousin and brother of  two victims, respectively, identified Beriso and Espares as the SKTF personnel who shot and killed the four miners.

The NBI investigators also inspected a compound near the crime scene, where the alleged bunkhouse of SKTF stood, and found a backhoe, ball mill, sacks of gold ore and a floating contraption on shallow waters fronting the compound.

Enrile noted that the presence of a backhoe in the compound could indicate SKTF’s interest in gold mining in Gata.

“Apparently, the village was peaceful and competing small-scale miners coexist peacefully until the SKTF came to Gata,” he said.

He said he had coordinated with the Mines and Geosciences Bureau  to act on the problems of mining in Gata.

Chief Supt. Victor Deona, provincial police chief, has deployed 35 policemen to Gata to maintain peace and order and diffuse tension in the area.

Gov. Luis Miguel “Migz” Villafuerte has also initiated his own investigation of the incident.

The Inquirer called up Villafuerte on his cellular phone on Monday and Saturday to get his reaction on the alleged involvement of SKTF personnel in the killings but he did not respond.