Lights out for iconic landmarks on Earth Hour

NEW YORK – Iconic landmarks around the world were plunged into darkness Saturday as lights went out in thousands of places as part of a global fundraising drive for local environmental projects.

New York’s Empire State Building, the ancient Acropolis in Athens, Rio’s Christ the Redeemer statue and Sydney’s Opera House were among those blacked out for 60 minutes at 8:30 pm local time for the annual Earth Hour.

The world’s tallest building, Dubai’s 200-story Burj Khalifa also joined the action, which was to include some 7,000 cities and towns in 150 countries by the time the event covers all the planet’s time zones.

In New York, the twinkling neon billboards of Times Square went dark along with the Empire State.

Swaths of private buildings in Manhattan also took part, a rarity in the city that famously never sleeps.

Other US cities were also due to follow suit, including the glittering mosaic of the Las Vegas strip.

At the Vatican, before St. Peter’s Basilica plunged into darkness, dozens of people shouted out a countdown, including a group of children dressed as Spider-Man – the first ever superhero ambassador for the campaign.

In Paris, a nine-year-old “mini Spider-Man” did the honors at the Eiffel Tower. However, since the tower that symbolizes the City of Light was still open to visitors, its spectacular dancing lights were idled five minutes for security reasons.

In Cape Town, South Africa — WWF’s 2014 Earth Hour capital — floodlights powered by energy from a nearby windfarm were trained on Table Mountain in order to be switched off for the observance.

Hong Kong’s stunning waterfront skyline was unrecognizable during the event, with the city’s tallest skyscraper, the International Commerce Centre, stripped of the vast light show usually wrapped around its 118 floors.

Earth Hour, launched in Sydney in 2007, partnered with payment giant PayPal to allow donors to contribute to specific projects from Russia and India to Canada and Indonesia using Asian fundraising site Crowdonomic.

“We are seeing some really big outcomes,” he told AFP.

But the stunt has drawn criticism, including from Danish political scientist Bjorn Lomborg who argues it does little for the real problem of global warming and diverts resources from other problems.

“This celebration of darkness sends the wrong message,” Lomborg said.

Projects under the “Earth Hour Blue” crowdfunding scheme – which aim to raise more than $650,000 in total – include a turtle center in Italy and funding for forest rangers in Indonesia.

Other projects include a $24,000 effort in the Philippines to bring fiberglass boat technology to coastal communities affected by Super Typhoon Haiyan in November.

In Nepal, $100,000 is being sought for the “A Flame Called Hope” program to provide biogas energy access to 150 households in the Terai region, reducing the need for wood as fuel and helping protect the habitat of endangered wildlife, according to the Earth Hour website.

“Spider-Man 2” star Garfield told reporters he was a personal supporter of the Nepal project.

“What they are doing is turning waste into energy, it’s like the cycle of life right there,” he said.

“If only everyone knew how simple it was.” 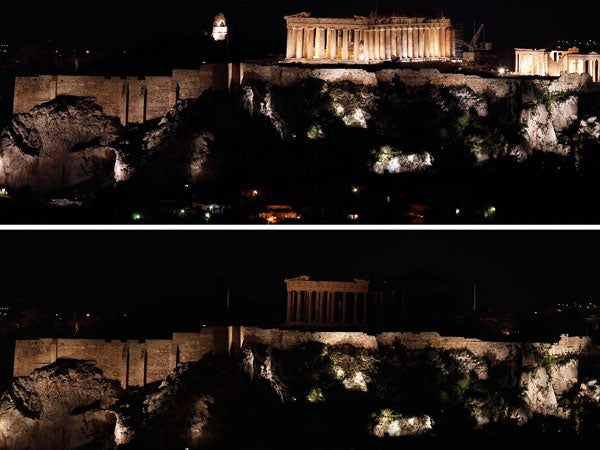 In this combination photo composed of two photographs, the Parthenon temple atop the Acropolis hill is seen before and after turning the lights were switched off to mark the annual Earth Hour in Athens, on Saturday March 29, 2014. Earth Hour is marked around the world, with millions expected turn out the lights to raise awareness about climate change. AP