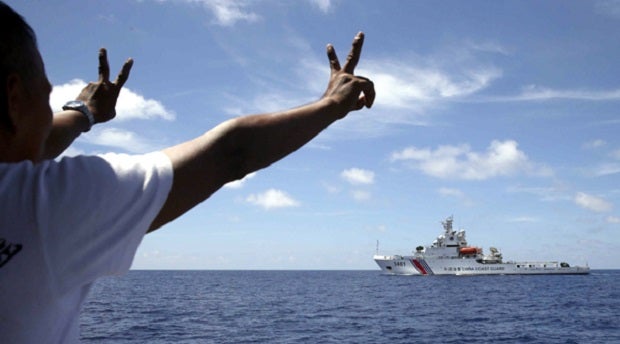 A China Coast Guard vessel attempts to block a Philippine government vessel as the latter tries to enter the Ayungin Shoal to orate Philippine troops and resupply provisions Saturday, March 29, 2014. A Philippine government ship slipped past a Chinese coast guard blockade Saturday and brought food and fresh troops to a marooned navy ship used as a base by Filipino troops to bolster the country’s territorial claims in the disputed South China Sea. AP

Philippine soldiers aboard a civilian vessel engaged on Saturday in a dramatic nearly two-hour standoff with Chinese Coast Guard ships near the disputed Ayungin (Second Thomas) Shoal claimed by both countries, an incident witnessed by journalists on board the Philippine vessel and a Philippine military plane circling the area.

Around an hour away from Ayungin, a Chinese Coast Guard ship twice crossed the bow of the smaller Philippine vessel in an attempt to stop it from proceeding. It radioed the Filipinos, telling them to stop entering “Chinese territory.”

But the Filipino captain maneuvered to shallow waters where the Chinese vessel, with a much larger displacement, could not follow without the risk of running aground.

The Philippine vessel finally slipped past the Chinese blockade to reach Ayungin Shoal, where a handful of Philippine Marines are stationed in a Navy vessel that has been grounded there since 1999 to assert Philippine sovereignty.

The military said the civilian ship, a research vessel of the Bureau of Fisheries and Aquatic Resources (BFAR) with soldiers on board, completed its mission to deliver fresh supplies to the BRP Sierra Madre and rotate the troops.

“They were able to pass through the Chinese Coast Guard vessel and the mission is a success,” Cherryl Tindog, a spokesperson for the military’s Western Command, told AFP.

“We have successfully resupplied and rotated the troops,” she said.

Four Chinese vessels had encircled Ayungin Shoal as the Philippine vessel approached, according to the AFP reporter who was on board a Philippine military plane circling the area.

Two of the vessels, with “Chinese Coast Guard” written on the hulls, then chased the Philippine boat and tried to block it from reaching the shoal.

The vessels appeared to get within a few hundred meters of each other.

The Department of Foreign Affairs (DFA) on Saturday, for the second time this month, fired off a protest against Chinese “harassment” in Ayungin Shoal.

“We condemn the harassment by the Chinese Coast Guard of our civilian vessels which were on their way to Ayungin Shoal to resupply provisions to our personnel stationed there,” said Assistant Secretary Charles Jose, the DFA spokesperson.

“We reiterate that Ayungin Shoal is part of the Philippines’ continental shelf and therefore has sovereign rights and jurisdiction over it. We demand that China cease taking actions that are a threat to our security,” he said.

Malacañang on Saturday said it was continuing to monitor the events at Ayungin Shoal but withheld comment pending an official account of the incident.

Saturday’s confrontation occurred a day before the Philippines was due to file its case with a United Nations tribunal to challenge China’s territorial claim to most of the South China Sea.

The Philippines’ legal case has infuriated China, which has said it will not participate. China has also warned the Philippines that bilateral relations will suffer if it continues to pursue its appeal to the United Nations.

China claims most of the South China Sea, even waters and islets close to the shores of its neighbors.

Ayungin Shoal is part of the Spratlys, a chain of islets and reefs that sit near key shipping lanes, are surrounded by rich fishing grounds and are also believed to lie atop huge oil and gas reserves.

The Philippines grounded an old Navy ship, the BRP Sierra Madre, on Ayungin Shoal in 1999, four years after China built structures on nearby, Philippine-claimed Mischief Reef.

Filipino troops have kept a presence on the ship ever since.

Until this month, China had never sought to block the Philippines from resupplying or rotating its soldiers there.

China successfully turned away a Philippine resupply boat on March 9. Saturday’s mission was the next attempt.

Although the military does not release figures on the number of soldiers stationed at Ayungin Shoal, there are believed to be fewer than 10.

Over China’s warnings and threats of sanctions, the Philippines is pushing ahead with the filing today of a “memorial,” or memorandum, with a United Nations arbitral tribunal handling the Philippine legal action challenging China’s  “nine-dash line” claim to the entire South China Sea.

The memorial will detail the Philippine arguments that the Chinese claim covers parts of the South China Sea that falls within the country’s exclusive economic zone, which the Philippines refers to as the West Philippine Sea.

“The Philippines is determined to proceed with the case. The memorial will be submitted electronically on March 30. Hard copy to follow,” Jose said.

The Philippines’ legal action seeking to nullify China’s nine-dash-line claim was filed in January last year with the UN tribunal, which holds court in the Permanent Court of Arbitration in The Hague, The Netherlands.

Today’s filing is in response to the five-member tribunal’s Aug. 27, 2013 order for the Philippines to file a memorial to “fully address all issues, including matters relating to the jurisdiction of the Arbitral Tribunal, the admissibility of the Philippines’ claim, as well as the merits of the dispute.”

The tribunal said that it would “determine the further course of the proceedings, including the need for and scheduling of any other written submissions and hearings, at an appropriate later stage, after seeking the views of the parties.”

China has refused to take part in the proceedings, telling the tribunal on Aug. 1 last year that “it does not accept the arbitration initiated by the Philippines.” Proceedings continue even with only one party participating, in accordance with the provisions of the United Nations Convention on the Law of the Sea, on which the Philippine case is based.

Asked whether the pleading would include Chinese incursions that the Philippines has protested after the case was filed, Jose said: “It will include everything that will bolster our case.”

In Berlin where he is on an official visit, Chinese President Xi Jinping said on Friday his country would not act aggressively regarding territorial claims in the South China Sea but was determined to safeguard its interests there.

“On the issue of the South China Sea, we will not provoke trouble ourselves but we will not fear troubles provoked by others either,” he said in a speech.

“When it comes to our sovereignty and territorial integrity we will strongly safeguard these interests,” Xi said.

China’s claims over islands, reefs and atolls in resource-rich waters of the South China Sea have set it directly against Vietnam and the Philippines, while Brunei, Taiwan and Malaysia have claims too.  Reports from AFP, AP Tarra Quismundo