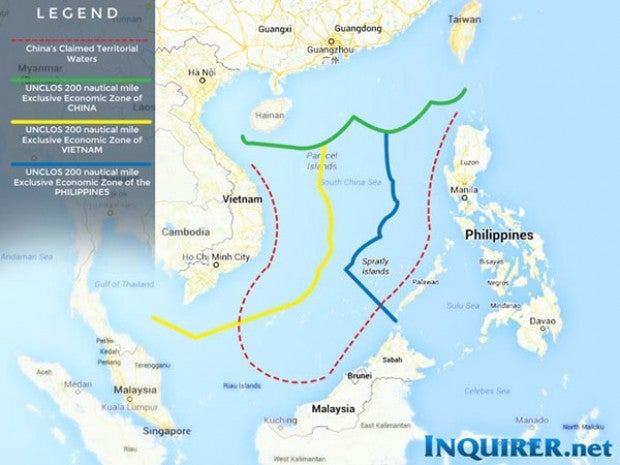 Unfazed by threats of sanctions from China, the government yesterday said it was pursuing its case in the United Nations challenging Beijing’s claim to most of the South China Sea, including areas Manila says is part of Philippine territory.

The Philippines is to file as scheduled its memorandum or formal pleading Sunday (Manila time), which would allow the UN Arbitral Tribunal to study Manila’s argument that the Chinese claim covers parts of Filipino territory.

President Aquino’s deputy spokesperson Abigail Valte said the government was pursuing the case despite official Chinese warnings of a fallout in bilateral relations.

“China will never accept nor participate in the international arbitration unilaterally initiated and pushed by the Philippines, and China’s position has a solid basis in international law,” Hong told a news conference in Beijing.

“We hope that the Philippine side … returns to the right track of resolving the dispute through negotiation and consultation as soon as possible, (and) stops going any further down the wrong track so as to avoid further damage to bilateral relations.”

“For the Philippine government, we can say that all factors have been taken into consideration when the discussions were being held on the matter of the arbitration,” Valte told reporters.

China claims most of the strategically important body of water as well as islets and reefs that border major sea lanes and are reputed to sit on vast oil and gas reserves.

The Philippines, whose forces are dwarfed by its giant neighbor in an increasingly tense standoff over some reefs and shoals, sought UN arbitration in January 2013 to settle the dispute, but China has rejected the move.

Valte said questions about China’s response to the filing of the Philippine memorandum should be addressed to Chinese officials.

The Philippines originally filed the case in the UN tribunal in 2013 but China refused to answer Manila’s allegations. Last August, the tribunal directed the Philippines to submit a memorandum—called  “memorial” in international law—outlining the merits of its case.

Manila refers to the areas it claims as parts of the West Philippine Sea.

“Let’s cross the bridge when we get there … At this point, some of the reports may be speculative and it would not be prudent for us to comment,” Valte said. “Let’s wait for whatever happens after the filing.”

“Upon filing, necessarily the other side will have to receive copies of the memorial, but I will have to refer you to the (Department of Foreign Affairs) on what will happen next or what won’t happen next,” she said.

Valte said that should the UN body issue a decision favorable to Manila, “that is additional weight for the Philippine position.”

“That is a tribunal that is empowered really to pass judgment on these things based on international law, which is upheld by most countries that subscribe to it,” she said.

The Philippines alleges that Chinese claims to areas of the South China Sea and its seabed cover areas as far as 1,611 kilometers from the nearest Chinese coast, and are thus illegal under the UN Convention on the Law of the Sea.

Both countries are signatories to the 1982 treaty.

In the latest hostile encounter between the two, Chinese Coast Guard ships this month blocked two Philippine-flagged vessels headed for Second Thomas Shoal in the Spratly group, around 200 km from the western Philippine island of Palawan.

The Philippines said the vessels were bringing supplies to Filipino Marines aboard a decrepit Navy ship that it beached on the shoal in 1999.

The Philippines has also accused China of firing water cannon at Filipino fishermen near Scarborough Shoal, another South China Sea outcrop. With a report from AFP

PH has backing of Vietnam, Malaysia vs China’s sea claims