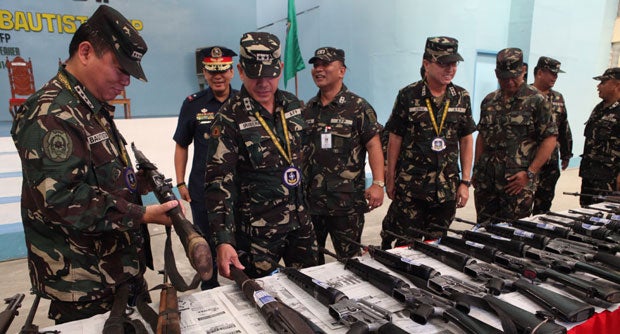 MANILA, Philippines– The New People’s Army will be irrelevant in less than five years, the Armed Forces of the Philippines (AFP) chief of staff said.

“After five years, they (NPA) will be irrelevant. They won’t even last for five years,” General Emmanuel Bautista told reporters on the eve of the NPA anniversary.

On Saturday, the NPA, one of Asia’s longest running insurgencies, will be in its 45th year.

(Their armed insurgency only results in the poverty of our countrymen.)

He said that the signing of the Bangsamoro peace pact on Thursday must be an inspiration to them, to be able to attain peace.

There are about 4,000 active rebels at present based on military figures. The numbers have barely changed since 2011.

Seventy-two communist rebels surrendered to the government fold in Bukidnon, the largest group to surrender this year.

The Armed Forces of the Philippines formally welcomed the rebels in a ceremony on Friday at the Army’s 4th Infantry Division (ID) in Bukidnon.

The rebels coordinated with the Army’s 4th ID to facilitate their “safe” and “voluntary surrender” to government authorities. They also brought with them a total of 69 assorted firearms.

This was the same day when the leaders of Communist Party of the Philippines– Chairman Benito Tiamzon and his wife, Secretary General Wilma Austria, were arrested by government forces in Cebu.

AFP to NPA on its 45th year: We have your supremo