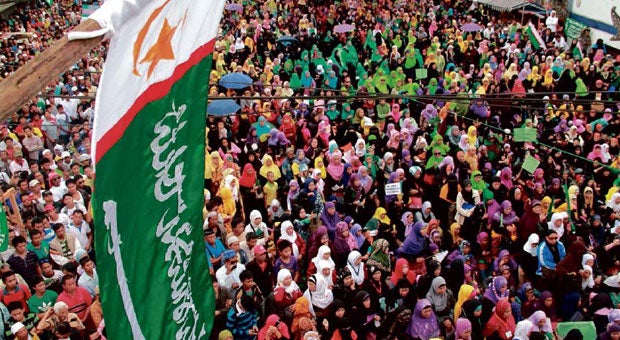 AN ESTIMATED 6,000 Bangsamoro supporters join a prayer rally in Banggolo,Marawi City, on Thursday to celebrate the signing of the Comprehensive Agreement on the Bangsamoro. RICHEL V. UMEL / INQUIRER MINDANAO

But the fighters chanted “Allahu Akbar (Allah is great)!” immediately after the signing was officially declared.

Some fighters also waved their hats in celebration while others threw these in the air.

Some 10,000 fighters and supporters gathered under colorful tents in Camp Darapanan as they closely monitored the signing of the Comprehensive Agreement on the Bangsamoro (CAB).

“The mood is very festive. We are so overwhelmed that members and supporters flocked to the camp. In fact, the attendance today is relatively larger than the attendance during the signing of the Framework Agreement on the Bangsamoro (in October last year),” Abdullah said.

Local leaders and commanders gave speeches expressing joy and determination to safeguard the agreement to ensure its full implementation.

In Manila, kite flyers and enthusiasts gathered at Rizal Park for the symbolic release of kites for peace to dramatize their support for the signing of the CAB.

Two hours before the signing of the agreement, members of the Kites Association of the Philippines (KAP), together with the National Youth Commission (NYC), the Young Moro Professionals Network (YMPN) and the OFWs for Peace, flew insect-shaped and statement kites at Burnham Green, the parade grounds of the park around 2 p.m.

A kite with the text “Fly high Pinas” adorned the sky beside the Quirino Grandstand along with other colorful kites that were flown to celebrate the historic signing of the peace agreement.

“This ‘Kites for Peace’ is our humble expression of support for peace in our country,” said KAP president Orlando Ongkinco.

The tradition of flying kites, according to YMPN coconvenor for peace committee Arman Disomimba, is very popular among Muslim children and youth, especially those from Tawi-Tawi.

“We call kite flying ‘layang layang’ and for us it symbolizes peace, unity, hope and recovery,” Disomimba said.

Mama said there was no reason for the people in the communities to celebrate because the agreement was compromised as it favored the government.

“And they should remember that the signing is not the end. It would still go through many processes, including that of Congress. The celebration today is a waste of money. They should have instead used it for social programs that would directly benefit Moro communities,” Mama said.

In Marawi City, close to 6,000 Maranaws gathered at the Cabili Plaza in the village of Banggolo to show their support for the CAB.

After the prayer rally, the crowd was expected to go to the provincial capitol grounds for the Kalilang (cultural festivities).

Three provinces in the Autonomous Region in Muslim Mindanao were also in a festive mood. The celebrations in Basilan, Tawi-Tawi and Sulu, however, had nothing to do with the signing of the CAB. Residents there were holding postgraduation parties.

Tawi-Tawi Rep. Ruby Sahali said she was invited to witness the signing in Malacañang, but had to beg off and instead send her father, Gov. Sadikul Sahali, “because we are all preoccupied here attending graduation celebrations.”

“The people of Tawi-Tawi are celebrating the graduation of their children now. It’s being done all over the province,” Sahali told the Inquirer in a phone interview.

“I am here in Bongao (capital town of Tawi-Tawi) for the series of graduation exercises since last week, and my people are more preoccupied and excited about graduation,” she added.

In Isabela City, Basilan, a 50-vehicle caravan was held on Thursday morning. Another motorcade was held in Lamitan City.

In Tagum City, Davao del Norte, far from the areas covered by the Bangsamoro entity, some 700 Muslims trooped to the local park to show their support for the CAB.

Southern Mindanao is not included in the new entity.

Colas said she had heard “many good things” about the framework agreement from their imams and other religious leaders, so she and her husband, who works for local power utility Davao del Norte Electric Cooperative, joined others from their community to attend the rally at the Rotary Park in Poblacion village.

The BDA is an office set up by the government to oversee the rehabilitation of areas affected by the decades-old conflict that stemmed from the Muslim secessionist rebellion.

“What we’re doing now is an information drive aimed not only for the Muslims but including our Christian and lumad (indigenous people) brethren,” said Sawat. “We want them to know more about the CAB and its benefits, and not necessarily compel people to support the initiative.”—Reports from Karlos Manlupig, Julie S. Alipala, Richel V. Umel and Frinston L. Lim, Inquirer Mindanao; and Maricar B. Brizuela in Manila