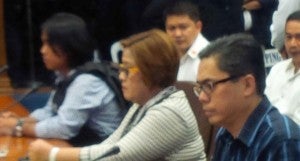 “I would like to state that I did not arrange that meeting. I was there to greet (former NBI) Director (Nonnatus) Rojas a belated happy birthday since the day before was his birthday,” Atty. Plaridel Bohol said in a message to reporters.

He said they were having lunch when lawyer Freddie Villamor arrived followed by Napoles who visited Rojas to complain about the NBI agents guarding her brother Reynald Lim at St. Luke’s Hospital.

Bohol said Napoles complained that the NBI agents were intruding in the private room of her brother who just had a heart bypass surgery causing inconvenience to him.

“At that time, I had no knowledge or inkling that the same woman would be the center of the PDAF (Priority Development Assistance Fund) scam. I just hope that I am not being linked to this issue to connect me in a malicious way to the Secretary of Justice,” Bohol said.