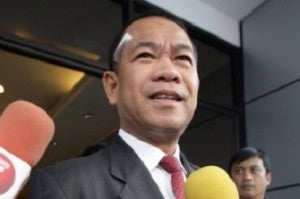 Esmeralda and fellow Deputy Director Ruel Lasala were removed from office following a reorganization at the NBI. He earlier hinted that high-ranking officials of the NBI had met with Napoles in a five-star hotel and in a restaurant, but decided to only name them at the “proper time.”

When asked to comment about her ex-husband’s involvement in the meeting between Napoles and the NBI, De Lima told reporters she does not want to preempt the findings of the NBI ad hoc committee.

“I don’t want to comment on that. Alam n’yo naman may adhoc committee. I [knew] that story beforehand because I became curious. But I do not want to say anything that will preempt the investigation,” De Lima said.

Meanwhile, Rojas admitted that Napoles visited the NBI but denied any irregularity with the meeting.

“Janet Napoles, accompanied by her lawyer, went to NBI office way back before her warrant of arrest was issued, during the pendency of the serious illegal detention case and [was] advised of the status of [her] case. The NBI submitted exhaustive documents to the investigating prosecutor that resulted [in] the filing of the case in court and the subsequent issuance of the warrants of arrest,” Rojas said.

“Her present detention is the result of the hard and honest work of the many dedicated men and women of the NBI. Any insinuation of irregularity and wrongdoing is strongly and flatly denied. We have always aspired for the highest levels of professionalism,” he added in a statement.