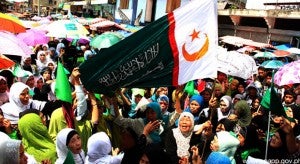 Residents of areas covered by the Bangsamoro entity could only hope for lasting peace. CONTRIBUTED PHOTO/www.opapp.gov.ph

MANILA, Philippines–What was supposed to be a celebration of peace turned awry after some leftist groups clashed with the Muslims along the Mendiola Bridge in Manila Thursday morning.

A radio report said 10 got injured when a scuffle took place between members of leftist and Muslim groups who have been staging their programs in celebration of the scheduled signing of the Comprehensive Agreement on the Bangsamoro (CAB).

The Muslims were reading verses from the Koran in their own program when the militant groups marched from Bustillos to Mendiola shouting slogans.

A confrontation between the Muslims and the CPP-NDF-NPA ensued, which then led into a brief melee that left 10 militants hurt.

The police, however, said only one casualty turned into them.

PO3 Gilbert Isole, Manil‎a Police District investigator of the case, said that only a certain Lemuelle Beñar turned to the authorities.

The 23-year-old Beñar, who was neither a Muslim nor a militant, sustained injuries to his eyes, nape and ribs while merely taking photos in the middle of the scuffle.

Civil Disturbance Management units have already responded for crowd control while Manila Police District personnel are still on standby in the area.

Later Thursday, the CAB will be inked by the Malacanang and leaders of Moro Islamic Liberation Front.