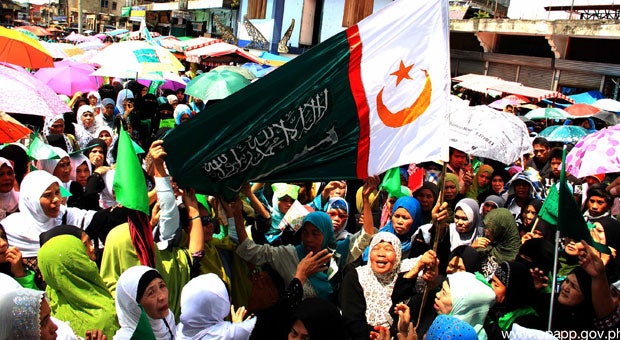 Residents of areas covered by the Bangsamoro entity could only hope for lasting peace. CONTRIBUTED PHOTO/www.opapp.gov.ph

COTABATO CITY, Philippines—For ordinary residents of areas that have been identified for inclusion in the Bangsamoro entity, the signing of the Comprehensive Agreement on Bangsamoro on Thursday (Mar. 27) is really a hope for celebration.

They hope it will really signal the end to years of violence that ruined not only their economy, livelihood and chance at progress but separated loved ones as well.

“We shouted for joy, we were jubilant when we heard the news about the signing,” Tato Sumagka, 47, a farmer from Sultan Kudarat, Maguindanao, said in Filipino.

Sumagka said he has been living in a violent environment since he was young.

“I have witnessed war, loss of lives and loss of opportunity for us to improve our lives,” he said.

“Since I was a child, I had already evacuated many times. We return home when news of peace has been restored and we flee again when fighting erupts,” added Tato, who said he had refused to join the Moro Islamic Liberation Front.

“The Moro people desires peace more than anyone in Luzon. I am tired of war. I flee many times in the past that’s why I now live in Cotabato City where we moved from Datu Piang during the wars. I sold my farm there and do business here because here it’s, at least, safe,” Kautin Sumalindig, 53, rice trader here, said.

But even as they celebrate the signing, ordinary Moros say fear has not left their hearts because of painful lessons from the past.

“You see we have so many peace agreements in the past and yet we remain poor, underdeveloped. While I should be celebrating with this latest agreement, I am also preparing myself for the worst. Who knows, the government is just changing names of government and but it is still run by the same people who enriched themselves at the expense of Bangsamoro people,” Sumalinding said.

Sumagka echoed Sumalinding’s line by saying: “I am hopeful this peace agreement will bring us genuine peace in our land. I am crossing my fingers this is the agreement that will really give us true peace.”

“Let”s see what will happen after the signing,” said Odin Latip,who, as a child, experienced leaving home many times over.

He said when the 1996 agreement with the Moro National Liberation Front was signed, there was also jubilation everywhere.

“But peace has remained elusive because of the off-and-on skirmishes,” Latip said.

Surin Sapal, who lost his father and a brother in the decades-old Moro armed struggle, said he has always been pessimistic but a bit of hope has crept into his heart that perhaps, “this agreement is true.”

“We have long wanted to live in peace and that it will really benefit ordinary people like us,” Sapal said.

Sansaluna Pagatin, 46, a vendor in Pikit, North Cotabato, had a similar view.

“I hope this will not become just another deal. We are so tired of violence and being evacuees,” Pagatin said.

Gov. Mujiv Hataman of the Autonomous Region in Muslim Mindanao said the signing of the CAB put in place the aspirations of the Bangsamoro, which took form in the aftermath of the Jabidah massacre more than 40 years ago.

(According to some accounts, scores of Moro youths, who were recruited into what was supposed to be a Marcos government plot to invade Sabah, were executed when they staged a mutiny against their government handlers who had not been giving them the benefits and living arrangements that were promised them during training.

An alleged survivor from the massacre got out and was able to tell his story to then Senator Benigno Aquino Jr (father of current President Benigno Aquino III).  Aquino exposed the Jabidah plot and massacre in a privilege speech in the Senate.  Around this time, Muslim youths led by Nur Misuari had formed the Moro National Liberation Front to fight for Muslim self-rule in Mindanao.)

He said while the parties would be meeting Manila to ink the CAB, activities in celebration of the event would also be held in the five-province region.

Among the events was the cultural fest that showcases the oneness of the Moro people.

“The cultural fest would showcase the rich culture in the Bangsamoro and that this would also show that there is harmony and unity amidst the diversity. In history, the peoples of Mindanao are one,” Mawalil said.

The military’s 6th Infantry Division here said it would remain on alert as opponents of the peace talks could mount destabilization efforts.

“We are always monitoring (the Bangsamoro Islamic Freedom Fighters) to avoid any security issues. So far there are no movements but we are always ready,” Col. Dickson Hermoso, 6th ID spokesperson, said.

The BIFF has repeatedly said peace and development would not be achieved under the current agreement because it supports the monopoly of power that the Manila government has been known for.

“There will only be real peace and progress in Mindanao if there is independence. We will not meddle with the GPH (Government of the Philippines)-MILF peace deal but we will continue our armed resistance until we are truly free,” BIFF spokesperson Abu Misry Mama said.

“Sometimes spoilers are dressed in “sheepskin” and pretend to be allies only to expose their real color later after they have already sown virus in the peace efforts. Even the best of allies can also create problems in how they frame their ideas, especially if they insist on them,” one of the editorials posted on the rebel group’s official site, Luwaran.com, on March 15 said.

“There is no other option,” the editorial, adding that “one has to be patient, understanding, and, above all, has to know how to manage his or her emotion.”

The rebel group said that during the consultations conducted by the Bangsamoro Transition Commission (BTC), they encountered “people who cannot toe this line or refuse to understand. Sometimes, they insist on their views.”

“More seriously, there are those who pretend to help but their real agenda is how to promote their rigid ideological line that tend to create trouble

than harmony, as well as those who ride on the issues, say, of women and indigenous peoples in order to secure the millions of grants from

foreign donors and institutions,” it added.

The rebel group, in news article that preceded a March 16 editorial, said it has been dealing, and would continue to deal with hard-liners in Zamboanga City, who have been “firm and strong” in their opposition to the city’s inclusion in the Bangsamoro entity.

“It isn’t an end game for our hopes and desires,” it said.

It hinted that it would also counter opposition by showing what the BTA could achieve in so short a time.

Toward broader autonomy for Muslim Mindanao

Read Next
Sergeant killed in new NPA attack
EDITORS' PICK
Acer Philippines welcomes you to its first flagship store
New Year, New Rediscoveries
Biden says Covid-19 expected to kill ‘well over 600,000’ in US
UP president challenges AFP claim on Reds’ campus infiltration
WHO says fabric facemasks still work against virus variants
Is your company a growth champion? Stand up and be recognized!
MOST READ
NBI files raps vs top execs of 2 tech firms
Ate Vi’s message to those against ABS-CBN’s franchise renewal
Cop, 12 others killed in Maguindanao shootout
OVP spokesman tells Mocha Uson: Don’t drag us into your nonsense
Don't miss out on the latest news and information.