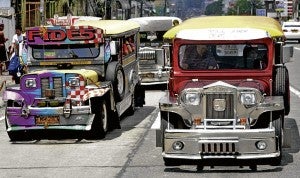 MANILA, Philippines—The Land Transportation Franchising and Regulatory Board denied Tuesday a P0.50 “provisional fare increase” sought by public jeepney operators for lack of merit, the LTFRB said in a statement.

The move comes as the LTFRB is still evaluating a petition for a P2 increase in the minimum jeepney fare from P8 to P10 for the first four kilometers that was filed last December by the Concerned Transport Organization, the Federation of Jeepney Operators and Drivers Associations of the Philippines and Alliance of Transport Operators and Drivers Associations of the Philippines. They also asked for an increase of P0.35 for every succeeding kilometer in Metro Manila and Regions III and IV.

LTFRB chair Winston Ginez noted in the statement that they will continue hearings on the transport groups’ petition for PUJ fare increase on March 28, April 4 and 11, 2014 .

Ginez said the LTFRB based its decision to turn down the provisional fare increase on information from a leading oil company and from the Department of Energy.

“We are aware that any fare adjustment creates a direct effect in the rise of cost of living, which in return affects both the commuting public and goods being transported,” Ginez said.

Other factors were also considered, he said.

For instance, a report presented by Petron Corp. during the public hearing last Feb. 21 showed that prices of diesel fuel in Metro Manila since May 2012 until January 4, 2013 have not breached the P45 per liter level.

On March 20, 2012, the board granted a provisional P0.50 increase in jeepney fare when the diesel fuel price reached P57 per liter. LTFRB granted that fare increase and recalled the Order on May 14, 2012 when the price of diesel went down to P45.

Other data from the DOE also showed that from September to December 2013, the price of diesel fuel remained below the P45 per liter level.

Earlier this month, price rollbacks were announced by various oil companies, and as of March 4, 2014, they had effected a decrease of P0.30 per liter in the price of diesel. Last week, the oil firms again reduced fuel prices due to downward adjustments in the international market, with diesel prices trimmed by an additional P0.70 per liter.

With the series of oil price reductions, the year-to-date net decrease for the week of March 18 onward for diesel is pegged at P1.35 per liter.

Ginez said that with the diesel fuel price remaining below the P45 per liter level, which was the main reason why the March 2012 provisional increase was recalled, and the transport groups’ pending request for a P2 increase, the board decided to deny the request for a provisional fare hike.