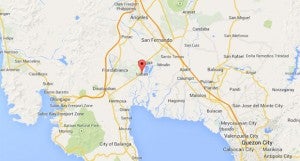 MANILA, Philippines — With a 2014 budget allocation of P12.5 billion, the Department of Public Works and Highways (DPWH) plans to build nearly 25,000 lineal meters of concrete bridges in various parts of the country as it aims to make all wooden bridges concrete or permanent by 2016 and strictly complying with international seismic standards.

Under its bridges program, the government earlier spent more than P25 billion for the construction and maintenance of over 70 bridges in 17 provinces nationwide.

The construction of the three bridges, which all started on May 4, 2012, is expected to be completed next month, along with two others in the municipalities of Guagua and Magalang, also in Pampanga, and one in Iba, Zambales.

The bridges construction program is one of the priority projects of the DPWH, which also intends to pave the remaining 15,872 kilometers of rough arterial roads nationwide by December this year and 15,370 kilometers of unpaved secondary roads by 2016.

In a report, a copy of which was obtained by the Philippine Daily Inquirer, the agency said “the construction and maintenance of the country’s national roads and bridges are intended to provide access to major airports, seaports, strategic tourist destinations, markets, production areas, and economic centers throughout the country.”

It also pointed out “the DPWH funding for our national roads and bridges is being increased substantially to ensure continued economic growth nationwide.”

The department’s Public Information Division (PID) pointed out that “not a single bridge constructed during the past three years has been linked to any funding or works-related irregularities.”

She explained that “reformed public works processes have resulted in the elimination of waste and the curbing of corruption, a more prudent and objective selection of projects and a strict adherence to the policy requiring the preparation of work programs with detailed estimates for each capital outlay instead of indiscriminate releasing of project funds.”

Pilorin added, “improved procurement procedures, as well as competitive and transparent bidding, have resulted in billions of pesos in savings, which can be utilized for additional infrastructure projects, like the rehabilitation of disaster-damaged public infrastructures and development of relocation sites for victims of typhoons and other natural calamities.”

Sometime in late 2012, the Senate blue ribbon committee conducted an investigation on the P111.94-billion bridges program of the Arroyo administration, where government officials allegedly took P10 billion to P15 billion in kickbacks.

The inquiry was prompted by Sen. Sergio Osmeña III who had accused the previous administration of entering into 14 anomalous contracts for the construction of bridges that were not fully utilized.

Then Sen. Panfilo Lacson had described the program, which were made up of contracts that spanned more than 11 years, as “bridges to nowhere.”

During one of the Senate hearings, Osmeña showed pictures of one of the bridges in Banga town, Aklan, where only one-third of the structure had been built.

He said that during the rainy season, the river filled up and left the remaining two-third of the way filled with mud.

Public Works and Highways Secretary Rogelio Singson, who attended the hearing, told the senators the bridge in the question was the 203-meter Guadalupe Bridge. He said the DPWH had provided the construction materials to the local government unit that was tasked to construct the bridge.

The DPWH head recalled that at the time of the bridge’s construction, the bridges construction program was still under the Office of the President and was being implemented by the Department of the Interior and Local Government.

Singson said the program was only transferred to the DPWH sometime in 2003.

The Commission on Audit (COA) had earlier said the program was a “failure in terms of coordination, implementation, management and overall efficiency.”

More than 17 percent of bridges built were also found to be “unsafe” by the government’s own inspectors, the COA also said.