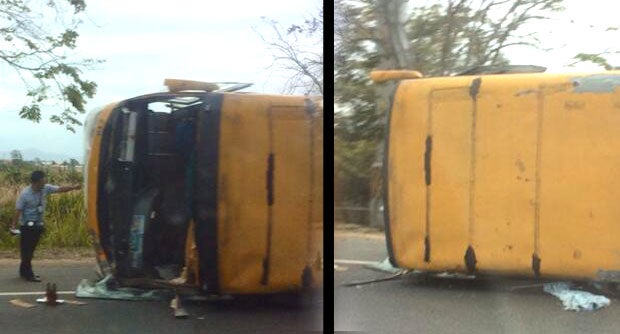 Chito Sibol, spokesman of SLEx, said an RRCG bus from Lipa City in Batangas lost one of its tires near Sta. Rosa, Laguna, at 6:20 a.m. on Monday causing the bus to turn on its side.

Authorities said 21 passengers were taken to Biñan Doctors Hospital, another 15 to Perpetual Hospital in Biñan, and nine to San Jose Hospital and Trauma Center in Calamba. One woman reportedly lost one of her arms because of the accident.

The police said they recovered an aluminium foil, a lighter, and a small plastic bag allegedly containing drugs on the driver’s seat.

Authorities have yet to confirm if the bus driver, Sulpicio Marasigan, was brought to the hospital or had escaped after the accident.