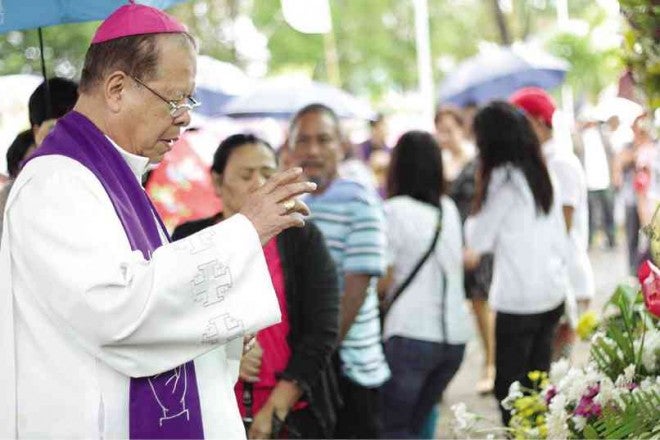 Davao Archbishop Emeritus Fernando Capalla blesses the remains of his brother Romeo Capalla at the Leon parish church before these were brought to his resting place. PHOTO COURTESY OF SINE PANAYANON

ILOILO CITY, Philippines—At least 6,000 mourners braved heavy rains on Sunday as they laid to rest Romeo Capalla, head of a fair trade center on Panay Island who was gunned down on March 15.

Many of the mourners wore white shirts with printed words that read “Justice for Romeo Capalla” when they attended the funeral Mass and burial in Leon town, about 28 kilometers northwest of this city.

Many of them came from Antique, Aklan and Capiz provinces. Some stayed outside the Leon parish church that was filled beyond capacity.

“We were expecting about 5,000 people to attend. This shows how Romy was loved and respected by his town mates and people he had helped,”said Angel Panganiban, general manager of Panay Fair Trade Center (PFTC).

Unidentified men gunned down Capalla in front of the public market of Oton town in Iloilo province on March 15 as he was assisting his 90-year-old mother-in-law board his sport utility vehicle. He died of bullet wounds in the head before reaching Western Visayas Medical Center in Iloilo City.

Capalla, 65, younger brother of Davao Archbishop Emeritus Fernando Capalla, was the chair of the board of directors of PFTC and the center’s general manager for more than 12 years.

PFTC helps produce and sell natural and organic products for local and international markets. It buys organic muscovado sugar and bananas at prices higher than the mainstream market from farmers and exports these to fair trade organizations in Europe and Asia.

In his homily, Archbishop Capalla called for justice and condemned the killing of his brother.

“We strongly condemn this heinous and unconscionable crime. We demand justice for my unarmed brother Romy and for many other victims like him. We condemn this barbarous act before his disabled mother-in-law,” the prelate said.

Police have not identified those responsible and the motive for the killing.

But Capalla’s colleagues and human rights groups have blamed alleged death squads operated by the military for the killing, citing the consistent tagging of Capalla as a leader of the rebel New People’s Army. Military officials have dismissed the allegations as baseless and have offered to help in the investigation.

In a statement, PFTC said Capalla’s heart was with the people.

“As he walked in the sugarcane fields and among the banana groves, he wondered how he could alleviate poverty in the poverty-stricken Island of Panay, rich in agricultural products,”the center said.

“We hope and pray that the assassins and their masters of this dastardly crime will be brought to justice,” the PFTC employees said in their statement.

Bayan Muna Representatives Neri Colmenares and Carlos Zarate have filed a resolution asking the House committee on human rights to investigate the killing of Capalla, who is also a founding member in Panay of Samahan ng mga Ex-Detainee Laban sa Detensyon at Aresto.