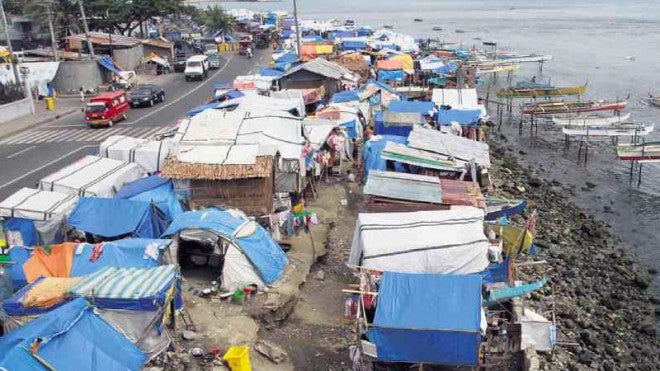 ZAMBOANGA CITY, Philippines—The loss of lives continues six months after a standoff between government forces and a splinter Moro rebel group, casting a shadow over the signing this week of a comprehensive Bangsamoro peace accord the Aquino administration hopes will end decades-long fighting in Mindanao.

It is not because of violence, but of disease stalking congested encampments and the refusal of local authorities to allow the evacuees to return to their original homes to lead normal lives long after the emergency spawned by the Moro National Liberation Front (MNLF) uprising had passed.

The military says nine civilians were killed in the three weeks of fighting in September last year that also left 23 soldiers and policemen and 100 MNLF fighters dead. More than 10,000 houses were burned in nine barangays (villages), forcing 116,000 people to flee their homes.

About half of those who were displaced have gone back to their residences. Around 20,000 are in nine evacuation centers in appalling conditions and 38,000 are in the homes of relatives or friends.

Since the end of the fighting, at least 102 more deaths have been recorded by a UN-led cluster, mainly among the seafaring minority groups in the encampments—the Badjao at the bay-front Roseller T. Lim Boulevard in the area known as Cawa-Cawa and the Tausug at Joaquin F. Enriquez Memorial Sports Complex.

In February, a spike in the mortality rate, especially among children under 5 years old, was registered: two deaths for every 10,000 population in the evacuation centers. It is regarded as a threshold for emergency intervention and normally rings alarm bells, and prompts urgent action, by UN humanitarian agencies headquartered in New York and Geneva.

The two camps for the seafarers are particularly unsustainable and should be immediately dismantled, said Peter Deck, head of the office in Mindanao of the United Nations High Commissioner for Refugees (UNHCR) and international humanitarian groups helping local authorities provide assistance to the evacuees.

The cluster says voluntary returns should be allowed now that the city of 800,000 people had been secured and normalcy had returned, invoking UN guiding principles for the protection of internally displaced peoples, or IDPs. This is the official term applied to those uprooted by civil conflicts—among many other causes—such as what the Aquino administration describes as the “Zamboanga siege” mounted by the MNLF on Sept. 9, 2013.

(ARMM) set up under a peace accord with the MNLF under the auspices of the Organization of Islamic Countries in 1996.

“We are the victims of the failure of the peace talks,” Mayor Maria Isabelle Climaco-Salazar of Zamboanga City said, citing the MNLF attempt to focus attention to their grievances by mounting the September siege in this center of commerce in southwestern Mindanao.

In two previous plebiscites since the 1996 accord with the MNLF, Zamboanga voted against inclusion in the Moro autonomous region. It also spearheaded an initiative in the Supreme Court to declare unconstitutional a Bangsamoro juridical entity during the Arroyo administration.

Dr. Rodel M. Agbulos, the city health officer, downplayed reports of increasing deaths in the camps, saying that the latest crude mortality rate from pneumonia, acute gastroenteritis and skin diseases was in fact less than the UN count.

“There are some weeks and days when we don’t have any mortalities. The 102 deaths reported is a cumulative number, meaning counted since September. This did not happen in one day, but over a long period,” Agbulos said.

“The situation is bad. I agree there’s really a need for immediate decongestion. I think that’s the main factor behind the mortalities and even the local government unit, and partner agencies agree with this,” he added.

The doctor said the city government was exerting all the efforts to relocate the evacuees to a transitory shelter, an initiative that the Badjao and the Tausug were opposing.

“They don’t want to be transferred to rehabilitation areas, which are upland. They prefer to be transferred along the seashore,” he said, referring to the Badjao, who live off the sea in makeshift houses on stilts in the water.

“My recommendation is to totally pull them out as soon as possible,” he said. “We lack latrines. They have been staying in tents for six months, exposed to all those things.”

Agbulos said the government had acquired a 17-hectare resettlement site in an area near the sea and that relocation would start there beginning next month.

The Badjao and the Tausug came from the seaside villages of Rio Hondo, Mariki and Barangay IV, where returns have been banned. Philippine Marines guard the entrance to these areas that are also declared off limits to reporters.

Before the MNLF siege, these barangays were known as a haven for drug dealers, smugglers and assassins. Victims of kidnap-for-ransom gangs were spirited out of Zamboanga through Rio Hondo in pump boats and taken to Basilan and Jolo islands—known lairs of the al-Qaida linked Abu Sayyaf bandits.

The UNHCR recognizes this problem, said Deck, a veteran of many humanitarian emergencies from Africa to Yugoslavia.

“We are trying to support the city authorities in identifying persons who have been living in these barangays who are fishermen and have lived peacefully in the area for over a few years so these persons could immediately be included in gradual return and reconstruction of their burned homes,” he said.

Authorities have allowed 69 Badjao families to relocate to a transit site in an elementary school at Rio Hondo, where temporary shelters have been constructed in a partially burned elementary school, where they have children enrolled. Security is tight and a curfew is enforced, preventing movement in the village and discouraging potential returns.

Last week, the city government unveiled a P2.7-billion roadmap to recovery and reconstruction to be carried out by the National Housing Authority for 7,248 families beginning next month through 2015. It includes the construction of 3,241 housing on stilts and 2,346 for housing on land.

Intended beneficiaries are property owners, and possibly house renters. It is unclear how many of the informal settlers, the Badjao and the Tausug, are included in the plans. So far, no one in the evacuation sites has been consulted, aid workers say.

City authorities do not envision the IDPs returning to their original homes, citing government laws on environmental protection, the need to restore mangroves and protect residents from sea surges.

They cite the tsunami-like waves generated by Super Typhoon Yolanda in November last year, which left more than 6,000 people dead and 4 million homeless in Eastern Visayas.

On Samar and Leyte islands, the Yolanda survivors have returned to their devastated villages, even to those along the coast, in spite of official pronouncements of a “no-build” zone 40 meters away from the shoreline. Four months after the typhoon struck, there is still no serious government effort to put flesh to a promise to “build back better.”

This mantra is printed on the T-shirt of the 47-year-old Zamboanga mayor, a former teacher with a master’s degree in family counseling from Loyola School of Theology at Ateneo de Manila University.

“We are going to bring back our IDPs near or close to their places of origin, with better housing, with better facilities, with infrastructure as well as allow them to engage in commerce,” said the mayor of the cash-strapped city.

Obviously overwhelmed by the magnitude of the uprising she has described as unparalleled in her generation, Salazar has appealed to donors to continue assistance to the IDPs.

The city’s rebuilding plan is so elaborate—including water, sewer and electrical systems installed in concrete houses—it would take months, if not years, to carry out, according to Badjao leaders.

They say the concepts do not seem to take into account the culture of the Badjao and the Tausug and the wood houses they live in. These groups had fled violence in their traditional homelands in Sulu and Tawi-Tawi provinces and had been welcomed with open arms in this spanking clean “City of Flowers,” where traces of Spanish colonial rule abound and people cling to a local—if bastardized—version of the Castilian tongue, called Chabacano. Here, toilets are marked “hombre” and “mujer.”

A study conducted by the British charity Oxfam based on interviews with 899 women in the evacuation centers shows that 92 percent of the respondents preferred going back to their original places before the fighting erupted.

“They are killing us slowly by keeping us here,” said Jalnari Hadjirul, a 61-year-old Badjao leader at Cawa-Cawa. “I think they should send us home now, or we will all die.”

Read Next
Pasay traffic expected to worsen
EDITORS' PICK
Experience clearer calls nationwide with Smart VoLTE
Lorenzana orders review of protocol in handling slain rebels’ remains
PNP probing influx of marijuana in NCR, adjacent provinces
Duterte: May Bonifacio inspire all Filipinos amid COVID-19 pandemic
Arthaland’s property management arm utilizes Amazon Web Services to enhance delivery of service
Smart Prepaid encourages the youth to take their passions to the next level and ‘Live GIGA’
MOST READ
‘What is mine is hers,’ says Matteo on sharing finances with his Popstar Royalty wife
Lorenzana orders review of protocol in handling slain rebels’ remains
DOF to PITC: Return P1 billion in interest on ‘idle’ funds
Robredo to gov’t: Listen to ‘cautious’ Metro mayors on holiday season shift to MGCQ
Don't miss out on the latest news and information.