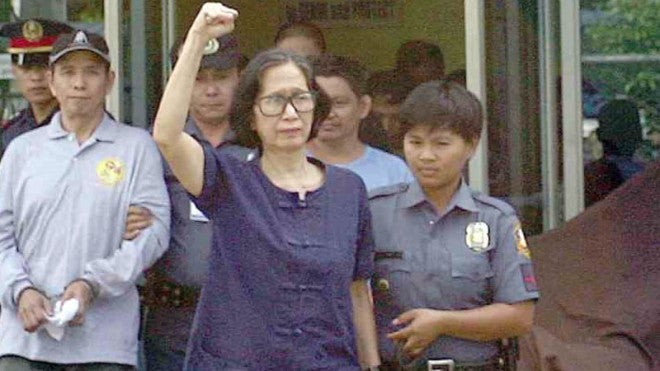 Defiant Communist leaders Wilma and Benito Tiamzon are escorted outside Camp Crame in Quezon City, where they were taken after their arrest in Cebu on Saturday. KIMBERLY DELA CRUZ

MANILA, Philippines—The government on Sunday refused to release two top officials of the Communist Party of the Philippines (CPP), Benito Tiamzon and his wife, Wilma, who were arrested on Saturday, further dimming prospects of reviving peace talks with the largest rebel group in the country.

Tiamzon chairs the CPP and heads its armed wing, the New People’s Army (NPA), while his wife serves as the party’s secretary general.

They were captured in Barangay (village) Zaragosa, Aloguinsan town, about 60 kilometers southwest of Cebu City, along with five others—Rex Villaflor, Nona Castillo, Joel Enano, Jeosi, Nepa and Arlene Panea—whom the military described as “staff personnel” of the Tiamzon couple.

Seized from the group were four pistols, two hand grenades and ammunition, as well as four laptops, 16 cellular phones and 20 flash drives.

Gen. Emmanuel Bautista, Armed Forces chief of staff, hailed the arrest of the Tiamzons as “another victory for the combined efforts between the [military and the police] and other stakeholders in pursuit of peace and security.”

On Sunday, the Tiamzons were flown to Manila on a chartered plane, said a source, who asked not to be named because he was not authorized to talk to the media. They were taken to Camp Crame, national headquarters of the Philippine National Police.

The National Democratic Front of the Philippines (NDFP), the CPP political arm, said those arrested were its consultants and were covered by immunity guarantees. The government rejected this claim.

Exiled CPP founder Jose Ma. Sison said, “It would be a pity if (President) Aquino is more interested in imprisoning a few NDFP consultants and prejudicing the peace negotiations by violating existing agreements like the Jasig (Joint Agreement on Safety and Immunity Guarantees).”

Sison, an NDFP consultant based in the Netherlands along with leaders of the group, said that if the Aquino administration no longer respected the Jasig, signed and approved mutually by the NDFP and the government, “then Mr. Aquino becomes responsible for killing the peace negotiations.”

Despite the arrests, the President’s peace adviser Teresita Deles said the government remained open to resuming peace talks with the communist rebels.

“The arrest of Benito and Wilma Tiamzon does not change our basic stance that peace negotiations with the CPP-NPA can proceed only with a clear and time-bound agenda that provide some possibility of bringing us closer to a final peace agreement,” Deles told the Inquirer in a text message.

“We continue to hope that the leadership of the CPP/NPA will come to the same conclusion sooner rather later,” she added.

The NDFP had been engaged in peace negotiations with the government for the past 27 years, but the on-and-off talks have not moved beyond minor agreements.

It demanded the “immediate” and “unconditional” release of the Tiamzon couple and the others, saying the arrests were a “flagrant violation” of the Jasig.

The arrest of the couple came a week before the 45th anniversary of the NPA on March 29. The rebels have been fighting since 1969, accusing successive Philippine administrations of subservience to US interests and failing to improve the lives of the poor.

Their numbers have dwindled to about 4,000 armed fighters from more than 26,000 in the late 1980s amid battle setbacks, surrenders and factionalism, but the resilient guerrillas remain the country’s most serious security threat.

They were charged with the murder of 15 civilians in Inopacan, Leyte, who were buried in a mass grave that was discovered in 2006.

Tiamzon is the former head of the Eastern Visayas Regional Party Committee when the purge of suspected government agents in the CPP-NPA allegedly took place, a military report said.

In a statement, Luis Jalandoni, chair of the NDFP peace panel, said that along with “so many other gross violations of the Jasig,” the latest incident “most seriously prejudices the GPH-NDFP peace negotiations.”

But Deles pinned the blame on the NDFP for the stalled peace talks.

“It will not be the first time for the NDFP to use the issue of arrests and prisoner release as an excuse to stall peace talks. The fact is the Tiamzons have not been participating in the talks,” she said. “The truth is it was the NDFP that caused the current impasse more than a year ago when they unilaterally changed the parameters of the special track, which we were pursuing on their initiative.”

Presidential spokesman Edwin Lacierda said the problem was not with the government.

“Our government is ready [to resume peace negotiations], but they are the ones putting up obstacles so the peace talks won’t move forward,” he said at a press briefing, referring to the NDFP.

Jalandoni said the Tiamzons should not have been arrested because they had Jasig ptotection. He described them as “NDFP consultants who have fulfilled and are fulfilling highly significant tasks in the peace negotiations.”

Under Jasig, signed in 1995 by representatives from the NDFP and the government, the members, consultants and staff of the NDFP who are part of the negotiating team are granted immunity from arrest, detention and are provided safety guarantees to prevent any incident that may jeopardize the peace negotiations.

The letter states that the Tiamzons are “entitled to the safety and immunity guarantees” under Jasig “for the duration of the peace negotiations,” Jalandoni said. “You are hereby required to facilitate the safe conduct and free passage of the above named person.”

In a statement, Deles shot back, saying: “To sustain their claim to Jasig protection is ridiculous because that would mean they can wage war and violence against the government and when caught, claim Jasig protection and expect to be released.”

“It is even more outrageous considering that the peace negotiations have not moved for over a year now,” she added.

Deles maintained that there was no violation of the Jasig, citing the NDFP’s failure to follow a July 2011 procedure “to verify the true identities of several dozen alleged NDFP consultants on the list of Jasig-protected individuals carrying aliases.”

Deles said that “through no fault of the government, the NDFP failed to open their own files that purportedly contained the photos and true identities of the said NDFP consultants.”

“This failure had the effect of rendering the Jasig inoperative for those using aliases and those who are not directly involved in the peace process,” she said.

“If indeed Benito Tiamzon was listed under an alias, he is no longer covered by the Jasig.”

Deles said: “The CPP/NPA is well aware of the effects of the failed verification. But they only have themselves to blame for rendering the Jasig inoperative for most of their alleged consultants.”

A list of 75 rebel consultants supposedly with pictures was jointly deposited by the Philippine government, the rebels and Church witnesses in a Dutch vault in 1996 so it could serve as a future basis for identifying guerrilla consultants who could be immune from arrests.

Philippine officials and the rebels, however, discovered in 2011 that two diskettes containing the list had been damaged with the passage of time and its details could no longer be retrieved. It made it impossible for the government to verify rebel claims that some of their captured comrades were on the roster of guerrillas with immunity.

The government’s refusal to release those rebels led to the collapse of peace talks brokered by Norway.

Following the arrest of top CPP officials, the government is gearing up for possible retaliatory attacks.

Defense Secretary Voltaire Gazmin said on Saturday night that the military was expecting retaliation from the communist rebels for their leaders’ arrest but that the AFP “will prepare for that.”

Sison said the arrests would not cripple the revolutionary movement because the roots of the armed revolution remained.

The Maoist rebellion has claimed some 30,000 lives, according to the military.—With reports from Marlon Ramos, Inquirer Visayas and AP